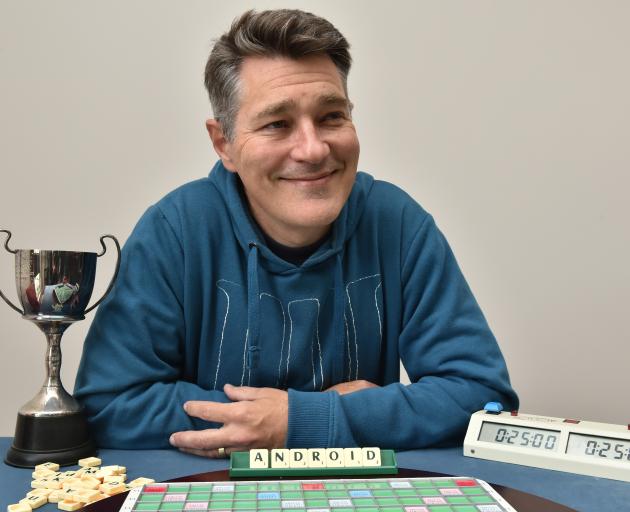 Dylan Early (48) won the Transtasman Scrabble individual tournament by three games in Dunedin at the weekend. Photo: Gregor Richardson
Anyone who has ever played Scrabble will know the frustration of finally being able to make a seven-letter word, but have nowhere to put it on the board.

Dylan Early seldom has that problem, which is why he won the Transtasman Scrabble tournament in Dunedin at the weekend.

He came up with "android", and because it was on a double word score and placed among other words already on the board, it was his best word of the tournament.

"That was my winning play.

Mr Early was humble about the win, but it is fair to say he is not your typical squabbling family Scrabble player.

He once scored 725 points in a game, which is one of the top 10 competition scores in the world.

The Wellington-based IT project manager said Scrabble started out as just a fun family game for him 25 years ago.

But after joining a Scrabble club at university, he got the bug.

"It piqued my interest and I realised people took it quite seriously.

"My competitive spirit just took over and I started getting very involved in the game."

He said Scrabble was "massive" in New Zealand and there were about 20 tournaments around the country each year.

Mr Early was one of 12 New Zealanders who competed against 12 Australian Scrabble players in the Transtasman tournament, also known as the Bledisloe Cup of Scrabble.

Unfortunately, his individual win was not enough to help New Zealand win the team event in the competition.

The powerful Australian team has won most of the biennial clashes, which began in 1996.

Mr Early said he now aimed to qualify to represent New Zealand at the World Scrabble Championships next year.