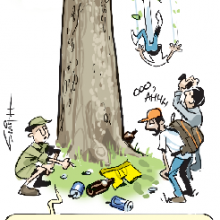 Staff at the Dunedin Botanic Garden are concerned about the growing popularity of a drinking game called "possum", in which participants sit in trees and drink large amounts of alcohol.

According to the website Urban Dictionary, "possum" is a "drinking game in which players have to sit in a tree, like possums, and consume a pack of 24 beers ... until they fall out of the tree from drunkenness".

Since then, it had increased in popularity to the point where it was "not uncommon" for gardens staff or security guards to have to chase away people playing the game.

Mr Matchett said his understanding of the game was that multiple people climbed a single tree, taking with them large amounts of alcohol and sometimes food.

This was a concern, he said, because of the food scraps, broken bottles and vomit often left behind, the potential for someone to get injured falling from a tree and the effect it had on other users of the gardens.

Staff were concerned about the damage that could be caused to trees, some of which were classed as heritage trees and were more than 100 years old.

Anyone caught playing the drinking game was asked to leave, with gardens staff working closely with the University of Otago's Campus Watch in keeping an eye on the area.

A university spokesman said the institution regarded "any such activities" as a breach of its code of conduct and would "respond accordingly".

"There have been two occasions earlier this year where students have been located by Campus Watch in trees, drinking and causing a public nuisance in the Botanic Garden.

"Because Campus Watch was involved in both cases, the students were required to clean up their litter and to meet with the proctor for disciplinary action," the spokesman said. 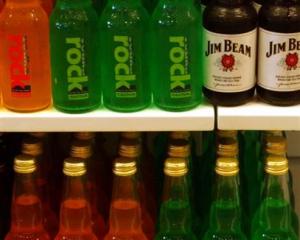