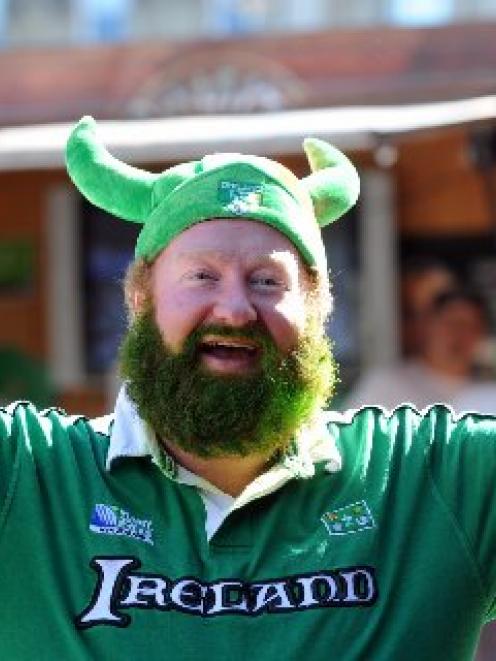 The man was clearly intoxicated as he sat on a station bench eating a takeaway before falling asleep, Senior Sergeant Tania Baron said.

"He didn't know where he was meant to be staying so he took a seat in the watch house foyer. It was a good start to St Patrick's Day," she said.

The man, who spoke with a "very strong Irish accent", was eventually asked to leave and did so without incident.

Only a few hours later, police received calls from George St retailers complaining of intoxicated people vomiting on the pavement.

Snr Sgt Baron said police officers responded to the 10am call, but could not locate the raucous group.

She said extra police officers were rostered on.

In the most serious incident, a student was hit on the back of the head with a bottle on Castle St by men looking to pick fights with students.

Snr Sgt Brown said four non-students went to the University of Otago campus on 6pm on Saturday with the intention of "picking a fight with some students".

The student suffered a split to the back of his head.

The four Dunedin men then left the scene in a vehicle, but were later apprehended by police. All of the men, who were in their 20s, had been drinking, he said.

One was charged with behaving aggressively, two with common assault, and one with assault with a weapon.

They are expected to appear in the Dunedin District Court this week.

However, for most Dunedin residents, the day involved a leisurely drink in the sun with friends.

Part of the Octagon was closed to traffic as live music and green-clad revellers started gathering from midday.

Joe Potter, of Dunedin, also savoured a stout in the sun with friends, remembering the year he spent living in Cork, Ireland, five years ago.

"Ever since then, it is a must-do to celebrate St Patrick's Day. Today is just perfect," he said.