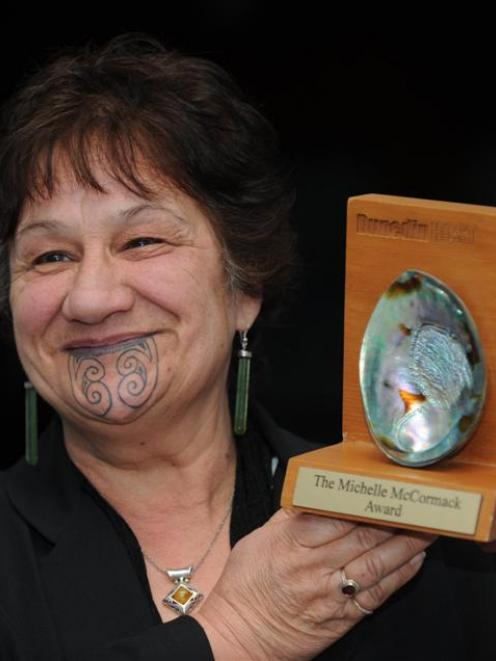 "I've never won anything in my life before," a stunned Mary Laurenson said when she was presented with the Michelle McCormick Award at the DunedinHost annual meeting in the Otago Museum last night.

"I started at the centre as a cleaner, doing the toilets and things, but I was so passionate that they made me a tour guide."

Mrs Laurenson (60) was nominated for the award for her energy and enthusiasm with both visitors and colleagues at the centre, on Otago Peninsula.

"My mother [Sarah Ruhia Te Tapu], who died 32 years ago, would be stoked with this."

Mrs Laurenson is of Waitaha descent. Her great-great-grandfather, Korako Karetai, was a tribal chief and her great-grandmother, grandmother and mother were all born at Taiaroa Head.

Mrs Laurenson was born in Christchurch and moved to Otakou 11 years ago. She started working at the albatross colony four years ago.

"It is my home. To be able to stand there and be connected with that land ... it's like a dream. It's such a privilege to work at the albatross centre," she said.

"To see those birds flying is majestic. People come from all over the world to see the albatrosses. I want to be there until I retire at 65."

The Michelle McCormick Award was initiated in 2005 to celebrate the life of New Zealand International Science Festival programme manager Dr McCormick, killed in a road accident in Dunedin in 2004.