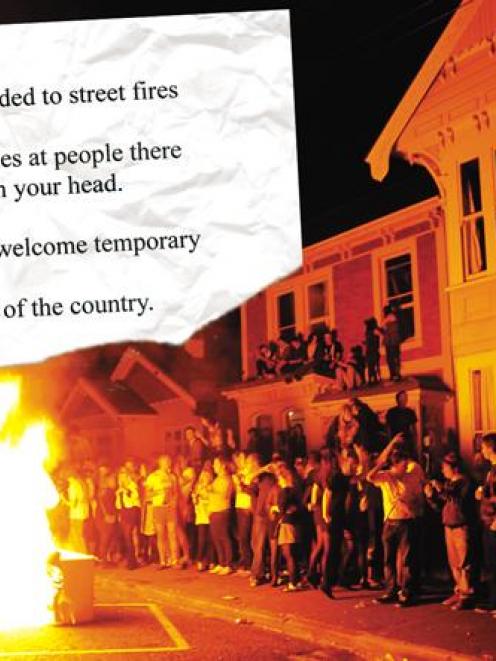 One of the unsigned notes (above) dropped in letter boxes throughout Castle St North and Howe St yesterday. As Castle St North returned to normal yesterday, students continued to blame police for heavy-handed tactics while police bosses defended their stance. Photo by Craig Baxter.
The timing of a visit to Dunedin yesterday by representatives of the Law Commission to discuss tightening of New Zealand's alcohol purchasing laws was coincidental, commission president Sir Geoffrey Palmer says.

But he said the disorder in North Dunedin that followed the Undie 500 event at the weekend was exactly the sort of scenario which had led to the commission being asked to examine existing alcohol laws and recommend changes.

"There was an air of total predictability about it all . . . it is clear that one of the factors which is driving situations like [the Undie 500] is an excess of alcohol consumption by some, which leads to lawlessness."

Preliminary evidence was there was strong support from judges, medical specialists, police and community leaders to amend legislation to reduce drinking excesses and curb social harm, he said at the time.

The commission has put forward several options for public comment, including reducing the hours when alcohol can be purchased, increasing the alcohol purchase age to 20, or leaving the minimum age for drinking in hotels at 18 but increasing the age for purchasing at bottle stores and supermarkets to 20.

Public submissions are being sought and commissioners are travelling the country talking to interested groups and submitters.

Dunedin Mayor Peter Chin, who was among about 30 people at a meeting hosted by the council yesterday afternoon, said the meeting had been planned for some time.

"I said at the meeting it was very difficult for me to be dispassionate about the review in the climate I had been [in] over the past couple of days.

"I am not in the headspace to be cool, calm and collected.

"I'm just so upset with what happened at the weekend.

"The root cause of all the trouble was alcohol - an overindulgence in alcohol."

"I support the review, but the commission's recommendations will have to be implemented by the Government or the review is just a hollow exercise."