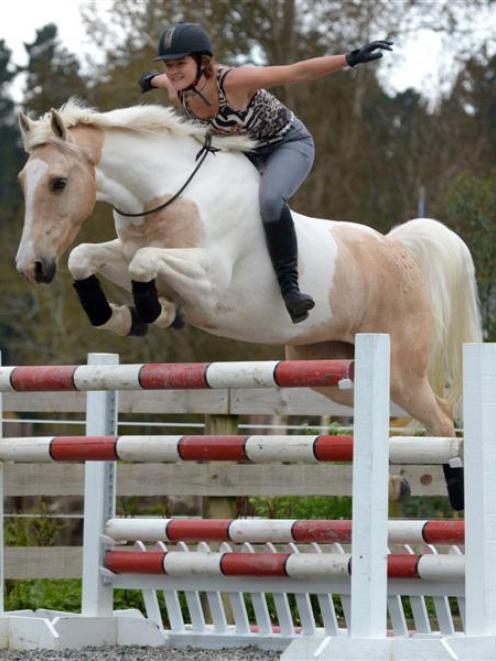 Alycia Burton shows her free riding skills on her horse Goldrush at the Waitati Valley Equestrian Centre near Waitati. Photo by Gerard O'Brien.
She has attracted more than four million views on YouTube as well as the interest of television networks in the US and Europe, and now the queen of equine acrobatics calls Dunedin home.

Free rider Alycia Burton came to Dunedin in October to provide lessons for a young riding enthusiast and fell in love with the area.

Free riding involves riding a horse without a saddle or bridle. It is not for the faint-hearted and is illegal in showjumping.

But what makes the 25-year-old's feats so extraordinary is that she tackles grand prix height (about 1.6m) jumps while free riding.

''It's very unique to be jumping that big with no gear on the horse,'' she says.

But Miss Burton and her 10-year-old gelding, Goldrush, approach the jump at a steady pace and then, with a powerful leap, horse and rider go over the bar with Miss Burton's hands off the horse and spread apart as if she were flying.

She credits Goldrush as much as herself for the performance.

''That horse makes it look very easy. But the calculations coming into it [the jump] make it very difficult. It's like driving a car with limited steering and no brakes.''

She felt ''incredibly vulnerable'' while performing the jumps but there was a ''huge amount'' of trust and respect between her and Goldrush.

Growing up near Kaitaia, Miss Burton learnt to ride as a child, and has been free riding for almost as long.

''I had no-one to tell me that [free riding] wasn't OK or acceptable,'' she said.

She started taking free riding ''really seriously'' about two years ago when she bought Goldrush.

She posted some pictures of her jumping online.

''People thought they were Photoshopped, so I made a quick YouTube video and that went viral,'' she said.

What followed was her own business training people in free riding and natural horsemanship.

Despite being a former Northland Eventing Young Rider of the Year, she no longer has time to compete in showjumping.

''Since I started free riding, I stopped trying to compete with other people and started trying to be the best I can be,'' she said.

She has a free riding world record coming up where she will attempt the highest jump with no gear on the horse.

Despite her organic development of the style, she suggests other riders take tuition before tackling it themselves.