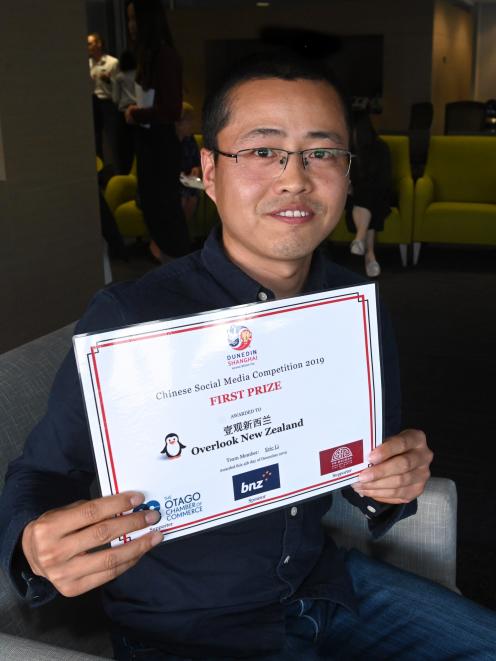 Eric Li, a newcomer to Dunedin who works as an engineer at Fisher & Paykel, received the award at a presentation this week. The competition was launched in July to promote Dunedin as a tourist destination to Chinese tourists.

The idea was the brainchild of the association’s chairwoman, Teresa Chan, who wanted to do something high-impact and fun to mark both the China-New Zealand Year of Tourism and the 25th anniversary of the Dunedin-Shanghai sister city relationship.

People were encouraged to submit an entry that could be posted on Chinese social media platforms to publicise the city. Mr Li had his own account on WeChat and his entry received about 70,000 hits.

An entry from Larnach Castle, which used a drone as way for tourists to take ‘‘selfies’’ was second.

Ms Chan said she envisaged more collaborations ‘‘between Kiwis and Chinese’’, which she hoped would happen when the the competition was run again either next year or in 2021.

The competition showed the value of having Chinese employees and the Chinese students and graduates in the city were a resource for the city, she said.