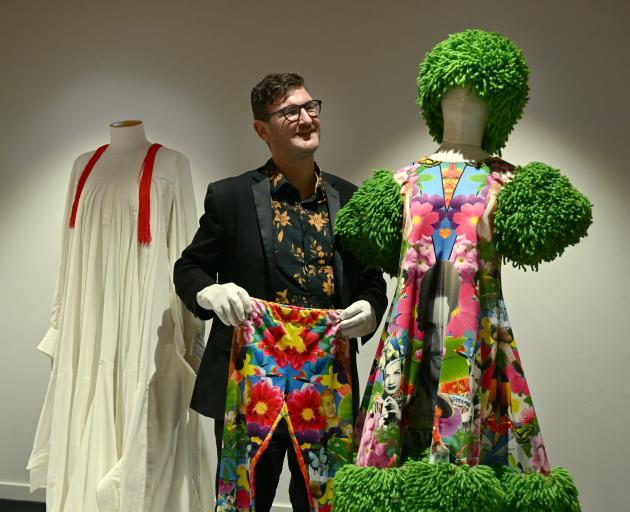 Otago Museum exhibitions and creative services head Craig Scott admires the Miss South America garment by award-winning fashion designer Rakel Blomsterberg which is now part of the museum’s collection. PHOTO: STEPHEN JAQUIERY
Most would take the money and run. But not Rakel Blomsterberg.

Fashion lovers have been hounding the 36-year-old fashion designer for nearly a decade to sell her Miss South America garment, which was one of five garments in her collection that won the iD Fashion International Emerging Designer Award in 2013.

Instead, the Otago Polytechnic graduate has decided to give it to Otago Museum’s Fashion Forward exhibition, so it can be admired for generations to come rather than sit in someone’s wardrobe.

The collection, entitled The World Through My Eyes, consists of outfits celebrating five different continents and is inspired by her love of travel.

Judges called it "eclectic and joyful, sleek, chic and professional, with intricate detailing and true depth".

"I have been asked numerous times to sell it [Miss South America], but it never felt like it was right," Ms Blomsterberg said.

The gown is a collage of popular culture with images of the Christ the Redeemer statue in the city of Rio de Janeiro, the Argentinian comic strip character Mafaldo, the Brazilian singer, samba dancer and actor Carmen Miranda, morpho butterflies and macaws, Pablo Escobar and Eva Peron.

Otago Museum humanities curator Moira White said the museum was "enormously grateful" Ms Blomsterberg had chosen it to be the permanent home of her award-winning work.

"This is just so exciting for Otago Museum.

"It is now in the museum’s permanent collection, and curation and exhibition staff are deciding when and how they will go on display again."