By Molly Houseman
0 Comments
A new initiative for St John in Dunedin will bring "dignity" during a difficult time.

Mercy Hospital and St John have partnered with local weavers to make kete for miscarried babies.

The kete can also be used as ipu whenua (placenta burial boxes) to be buried in a special place following the birth of a baby, which is a customary Maori practice.

St John intensive care paramedic Jeff Aukuso, who initiated the project, said during his time as a paramedic he and his colleagues had attended miscarriages and had resorted to using bio-hazard bags or containers to place miscarried babies in.

"After those incidents, it felt like it wasn’t very dignified." 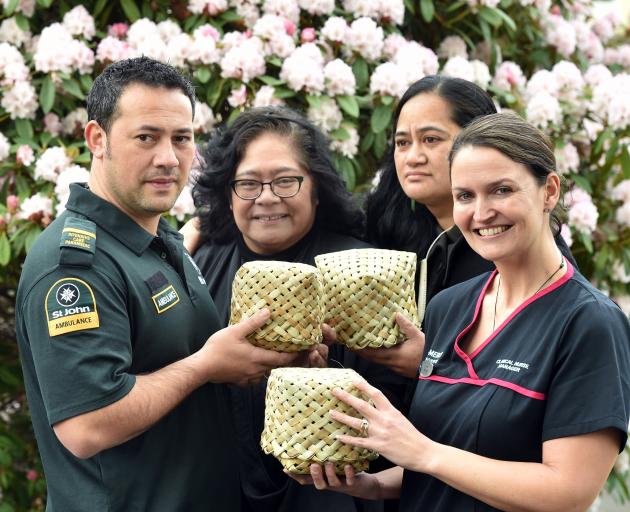 Holding some of the kete which will go in St John ambulances in Dunedin for miscarried babies are (from left) St John intensive care paramedic Jeff Aukuso, Mercy Hospital mission co-ordinator Alofa Lale, Maori weaver Lucy Smith, who is weaving the kete, and Mercy Hospital clinical nurse manager Lorelei Aukuso. PHOTO: PETER MCINTOSH
He discussed his idea with other people who had had similar experiences and decided to contact Mercy Hospital to see if anyone could help develop the idea.

He received a warm response.

Mercy Hospital mission co-ordinator Alofa Lale said the idea fitted with the hospital’s mission of the "protecting and preserving of life and dignity of life".

"It is a great initiative ... We have been blessed to support Jeff and his vision," she said.

The final design was biodegradable, and allowed a miscarried baby or placenta to "return to the earth".

She will be paid by the hospital to continue weaving the kete.

Mercy Hospital clinical nurse manager Lorelei Aukuso said the kete would be placed in about 10 ambulances in Dunedin.

It was not a national approach.