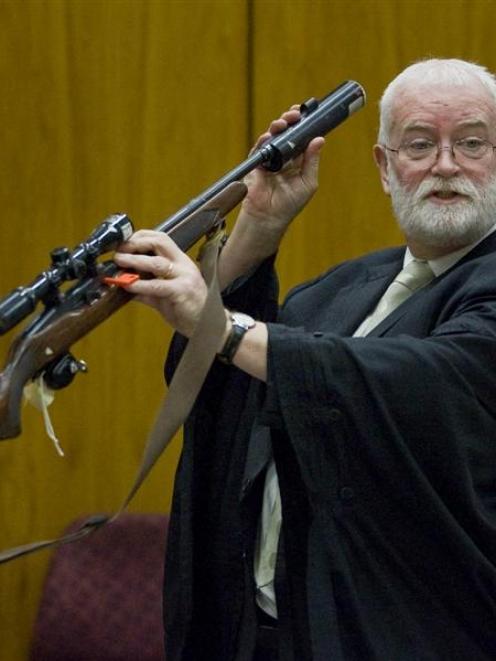 Kieran Raftery QC (above) explains that Stephen Bain left fingerprints on the murder weapon while fighting his killer, during his closing of the Crown's case during the retrial of David Bain.
Forensic evidence in the trial of 37-year-old David Bain gave a firm picture that Bain, not his father, killed his family, the High Court at Christchurch heard yesterday.

There was no evidence to connect Robin Bain with any of the murders but "a volume of evidence" connecting David Bain with the scene in Stephen's room, Crown counsel Kieran Raftery told the jurors, who will tomorrow be asked to reach a verdict in the murder trial.

The trial, before Justice Panckhurst, began on March 2.

"Whoever killed Stephen killed everyone else in the house that day," Mr Raftery said.

The fact the Winchester .22 rifle used in the five murders was David Bain's did not prove he was the killer, but it was a strong starting point. The rifle and the ammunition were kept in his room as was the trigger lock, the key for which was in the pocket of an anorak left in Robin Bain's van.

A spare key was in a lidded container under a hacky-sack and Bain told police - in what Mr Raftery described as "a little Freudian slip" - nobody in the family knew where it was.

The bloodstained gloves found in Stephen's room belonged to David Bain, who would have worn them - "like anyone committing murder and wanting to get away with it"- to hide the fingerprints.

The incident was going to end with a message on the computer saying "I'm innocent, Dad's guilty" and that would have happened had it not been for the fight in Stephen's room, Mr Raftery said.

The rifle jammed, the gloves came off and were later found under the bed, indicating Bain's involvement in the murders as opposed to his father's.

There was no indication who was killed first, but there was a clear indication "through the use of gloves" that Bain was the murderer. Laniet was shot three times, Margaret and Arawa once and they were dead in minutes. But there was "nothing instantaneous" in Stephen's room.

At the first trial, Bain said he went into Stephen's room and tried to help him but could see he was well and truly dead. Yet when he heard his sister gurgling, suggesting she might still be alive, he did nothing for 15 to 20 minutes before calling 111 and saying "they're all dead".

"And they certainly were by then," Mr Raftery said.

The first shot to Stephen did not kill him; it pierced his hand and skimmed his scalp causing profuse bleeding, spattering blood everywhere. Everyone involved in that scene was going to be covered in blood.

Bain was wearing gloves to try and mask his fingerprints and the gloves were covered in blood. It was not known how the gloves came off, but they ended up under the bed in the course of the struggle with Stephen, Mr Raftery said.

There were four bloodied fingerprints from David Bain on the rifle, Mr Raftery told the jurors, demonstrating how the Crown said they were made by Bain as he was pushing the rifle down at his younger brother.

A print from Stephen got on the silencer as the boy tried to push the gun up while his killer was standing over him.

"That rifle speaks volumes about what happened in Stephen's room," Mr Raftery said.

It was a vital piece of evidence linking David Bain to the killings, as did evidence of small traces of Stephen's blood in several places on the front and back of Bain's white shirt and on the crotch of his shorts.

Bain's prints were described by fingerprint officer Kim Jones as being in blood although the defence witness Carl Lloyd said the photographs suggested otherwise to him.

And Mr Raftery asked the jurors to consider the relative strength of the protagonists. In the defence scenario a frail 58-year-old man "going on 78" on a downhill spiral of depression had to overpower a much feistier Stephen, who fought for survival with every inch of his frame.

The assailant had to be a strong man and David Bain would have fulfilled that role much better than Robin.

The lens found under the ice skate in Stephen's room matched the lens found in Bain's bedroom and while Bain said the glasses were his mother's, he had worn them previously.

The defence alleged the lens was planted by the police, but it was now known the sequence of photographs in the defence booklet used to support that contention was wrong. It was an unjustified allegation based on a totally false premise, Mr Raftery said.

He also reminded the jury of what ambulance officers said about Bain feigning a seizure.

And they should consider carefully how Robin Bain came to be lying where he was if he committed suicide and how the 10-shot magazine ended up on its curved edge nearby "a peculiar position if it's been dropped from a height by a man who's just shot himself". The suicide was "staged", Mr Raftery said.

Bain had ensured he was noticed on his paper round that morning by going on to a property when he had been asked not to because his dog made the property owner's dog bark. He was creating an alibi. Two other people remembered getting their papers early.

But the time Bain said he returned home did not tally because the washing machine he turned on soon afterwards was not running when the police arrived. The officers had been listening intently, as they did not know who was in the house.

And Bain had injuries to his head and his body which he could not explain, "all small factors but they build up a picture".

Mr Raftery ended his address by reminding the jurors of comments Bain made earlier to friends about feeling "something horrible was going to happen" and, more significantly, that he always seemed to end up "hurting those I love".

"And that is exactly what he's done in this case," Mr Raftery told the hushed courtroom.

• No evidence incest allegations ever revealed.

• No psychiatric evidence Robin depressed, in fact only that he was upbeat and positive in the months before the murders.

• Suicide note odd and effectively a get out of jail free card for David.

• Computer turn on time (44sec) too long to wait for someone hell-bent on committing suicide and expecting someone to return home any minute.

• Robin's body in odd position if he committed suicide by method defence suggests.

• David more likely to win fight with Stephen than Robin.

• David only person who knew location of spare key for the trigger lock for murder weapon.

• David's fingerprints in blood on murder weapon and palm-print in apparent blood on the washing machine.

• Why would Robin wear gloves if he was going to leave a suicide note and commit suicide, thereby advertising he was the killer?

• Light in Laniet's room turned off.

• David had the opportunity to dispose of the item held over Laniet as she was shot.

• David used paper round as alibi.

• Missing lens was not planted, defence used photographs out of order.

• Post-traumatic stress disorder can affect the guilty, too.

• Magazine on its edge by Robin's body appeared to be put there deliberately to make it seem he had shot himself, but could not possibly fall in that position.

• Washing machine not on when police arrived.

• Changed story about whom he had seen dead.

• Stephen's blood was on the bottom, back and front of David's T-shirt and on his sock and shorts.

• No blood from anyone else on Robin - why would Robin change if he was going to kill himself?

• Prior to murders David told friends of a premonition something horrible was going to happen and told same friends afterwards, the murders were that horrible thing.