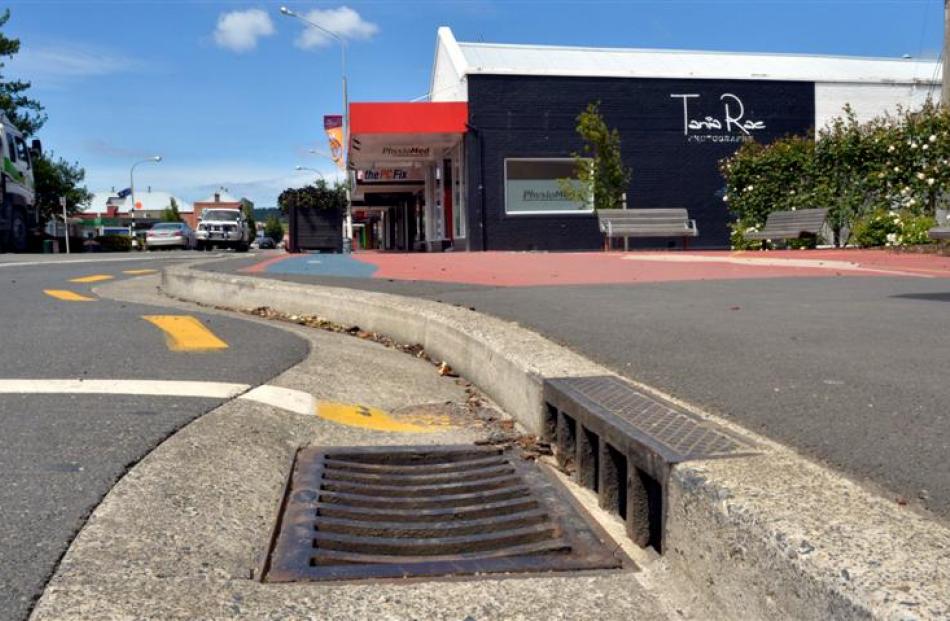 Mosgiel street improvements that have blocked the former intersection of Lanark St (right, behind bushes) and Gordon Rd (pictured) are again being blamed for flooding problems in the main street. Photo by Gerard O'Brien.

About a dozen shops were affected by a sudden downpour of 25mm of rain on Saturday afternoon, overwhelming Mosgiel's limited stormwater system and sending floodwater into main street shops.

Mosgiel's stormwater infrastructure was known to be inadequate, with pipes in some areas only able to cope with a one-in-two-year rainfall event.

That meant it did not take much rainfall for flooding to begin accumulating on roads, she said.

In the past, the layout of Gordon Rd - the main street - had allowed water to run off into side streets, where it could sit until stormwater pipes caught up and it drained away, she said.

"What it's not supposed to do is go into shops."

However, beautification work undertaken by the council about a decade ago, and modified more recently, had disrupted those flow paths, she said.

That included closing Glasgow and Lanark Sts - where they intersected Gordon Rd - to create pocket parks.

The result was that water now accumulated on the main street until it spilled over into shops, Ms McElhone said.

The council's transportation staff would be talking to staff from the New Zealand Transport Agency - responsible for Gordon Rd - about help with minor improvements to try to prevent a recurrence.

That could include modifying or reversing some of the beautification work undertaken along the street, to make sure water flows were not impeded, she said.

The response to Saturday's flooding had been labelled "pathetic" by Mosgiel Taieri Community Board member Martin Dillon, who also questioned why the Fire Service did not start pumping out the affected shops.

Council staff defended the response of their contractors at the time, saying there was nothing they could have done, as did Lookout Point Station Officer Wayne Stephenson, who said there was nowhere for firefighters to pump the water.

However, it was not the first time the street improvements had been blamed for exacerbating flooding problems.

In 2008, community board chairman Barry Barbour called for the reopening of Glasgow and Lanark Sts to alleviate flooding problems.

Both were closed in 2003 to create "pocket parks", but Gordon Rd shops had been flooded or threatened with inundation at least twice since, it was reported at the time.

The council's then-roading manager, Mike Costelloe, said the suggestion would be considered, but the streets had remained closed off.

Council roading engineer Peter Standring said "bubble-up tanks" had been added since then, which took water from Gordon Rd and siphoned it into side streets.

Those had generally worked well in other downpours, but had been overwhelmed on Saturday, he said.

"They would be working, but not hard enough. We probably need more facility there."

Council transportation operations manager Graeme Hamilton said yesterday he would meet NZTA staff later in the month, and more details would be confirmed after that.

However, Ms McElhone said the long-term solution would come as the council gradually replaced small stormwater pipes with larger ones, able to accommodate at least a one-in-10-year event, across Mosgiel.

Because of the cost involved, that work would be done gradually as pipes came up for renewal, she said.

"We are talking decades, rather than years."