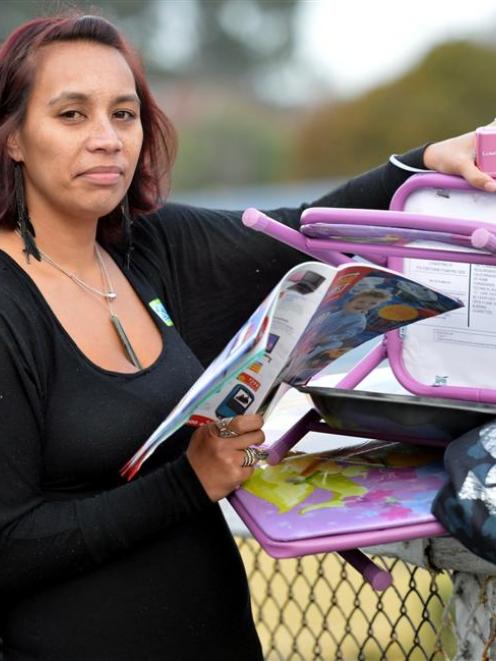 She gives budgeting advice to beneficiaries two days a week at Work and Income in Dunedin. Many were Home Direct customers who paid up to $70 a week to the company.

''I think they use them because they are targeted,'' Ms Wallace said.

Home Direct trucks had become more prevalent in Dunedin in the past two years, she said. New customers were ''easily hooked'' and were repaying debt with money that should be spent on food.

One of her clients, beneficiary Axelina Pokipoki (30), said a Home Direct salesman knocked on her door in central Dunedin last year and asked how much she could afford to pay the company each week.

Although she told the salesman she had little spare money, he told her she could have $250 of products from the truck parked outside, then and there, if she committed to a weekly $15 direct debit.

Although, the stock in the truck was ''uninspiring'' and ''pricey'', she found clothing for her daughters Broklynn (8) and Taia (6), Miss Pokipoki said.

Although she knew the same set would cost her $30 elsewhere, she bought the clothing to keep her daughter happy, she said.

''I had to get it for her because she was right there and she liked it and really wanted it ... I don't like it when the truck comes because my two girls want to be nosey and want everything.''

When the truck arrived, she told her daughters the same clothes could be bought cheaper elsewhere, but her daughters knew she had no money to shop elsewhere and pushed her to buy from the truck.

Home Direct called her cellphone regularly trying to sell her goods and she had stopped answering calls from unrecognised numbers, she said.

She owed Home Direct about $800 and the weekly repayments had increased to $30. Miss Pokipoki was unaware of the interest rate charged on the debt.

The operators repeatedly sought out the residents of lower socio-economic neighbourhoods.

''Home Direct is targeting customers. They drive all around, particularly the St Kilda and Brockville areas ... it is a very big problem.''

Many beneficiaries coming to the agency for budgeting advice were servicing between $30 and $50 of debt to Home Direct each week, she said.

''They tend to sell overpriced goods and they give people credit and charge immense interest,'' Mr Doocey said.

Some Home Direct customers had set up an automatic payment and the payments continued after their debt was paid back.

Home Direct staff considered the extra payments a credit to an ''ongoing'' account, he said.

''Which is crazy. You should pay exactly what you've been told you are going to pay and no more. You're dealing with financially illiterate people and a company which has no scruples.''

''We are a nationwide retailer with tens of thousands of customers. Customers choose to shop with us for the convenience of shopping from home, with a range of payment options to suit them.''

Customers with hire purchase agreements were charged a $40 set-up fee and 19.5% interest. A 20% deposit was usually required, but the deposit amount could vary, she said.

A $15 fee was charged if a customer missed a payment. The charge could be waived if Home Direct staff were contacted before the payment was missed. Ms Comrie said she could not comment about the reports to Consumer NZ about customers' payments continuing beyond their debt being cleared.

''I have never been contacted by Consumer NZ. If a customer has a query or complaint, all they have to do is contact our call centre and we will happily work with them to resolve the query.''