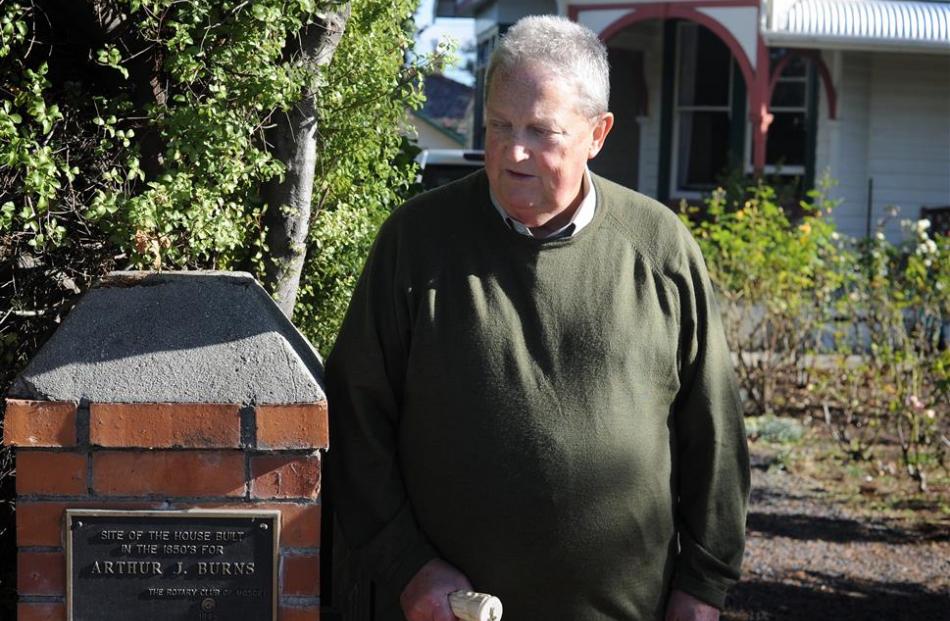 Emeritus Prof Martin Ferguson stands beside a plaque marking the site of an earlier house, once occupied by Arthur Burns, one of Mosgiel's founders, in Duke St, Mosgiel. Photo by Christine O'Connor.

Emeritus Prof Martin Ferguson says he felt "great relief'' when he recently found the site of an early house occupied by Arthur Burns, a key figure in the founding of Mosgiel.

Mr Burns was the son of the Rev Thomas Burns, a prominent Scottish-born Presbyterian minister, and one of the founders of the early European settlement of Dunedin and Otago.

Prof Ferguson, a retired senior researcher and teacher at the University of Otago School of Dentistry, said he initially developed an obsession with the origin of the Mosgiel name.

This also prompted a project to restore the grave of Mr Burns, one of the town's key founders, which is in poor repair in Dunedin's Southern Cemetery.

He named the town Mosgiel after his great-uncle Robert Burns's Mossgiel farm in Scotland.

In recent weeks, Prof Ferguson has been involved in an intense hunt to locate one of the houses owned by Mr Burns in Mosgiel, and built by him in 1861.

Despite extensive research involving several libraries, he had been unable to locate the exact site of the house, but recently found it, in Duke St, Prof Ferguson said.

The Rotary Club of Mosgiel affixed a plaque on a gatepost at the property, noting it was the site of the earlier Burns house,

which no longer exists, the house now on the site having been built later.

Prof Ferguson, who was also born in Scotland, was excited to discover the house site.

He was also "very hopeful'' that the Southern Cemetery grave would be properly repaired and restored.

"Sorting out the grave will be good,'' he said.

He is still striving to raise most of about $3000 required to undertake repairs on the dilapidated grave, and still has "a long way still to go'' to raise the money. More than $2500 is still sought.

But Prof Ferguson also has wider goals and is keen to raise awareness of Mr Burns and Mosgiel-Taieri heritage, through "something that needs to be long term''.

He would eventually like to establish an annual essay competition, focusing on Mr Burns, and Mosgiel-Taieri heritage.

Given the key role of Arthur Burns in the founding of Mosgiel, and the development of flour and woollen mills there, more should be done to raise awareness about his achievements, Prof Ferguson said.