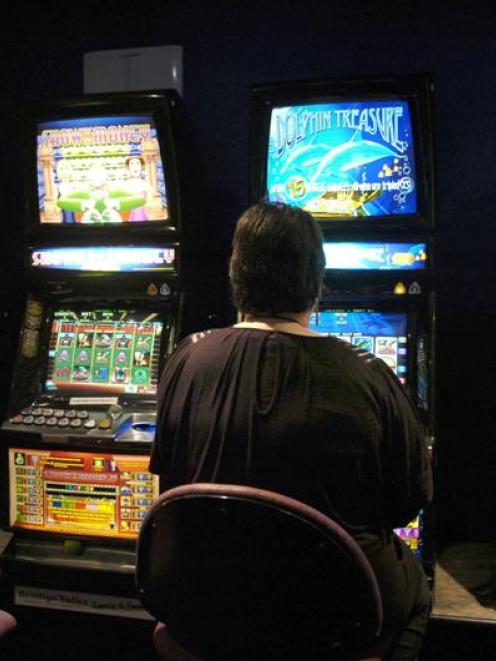 A pokie player generates cash. Photo by Jane Dawber.
One of the biggest recipients of pokie grants in Dunedin - the Dunedin City Council - could be involved in the future distribution of gambling cash.

Released figures reveal the council was the second-biggest recipient of pokie grants for the Dunedin area, receiving $1.27 million for the two-year period ending March 31, just behind racing with $1.28 million.

Under the proposed Gambling (Gambling Harm) Reduction Amendment Bill, pokie proceeds would be distributed to the community from which they were raised, at the lowest electoral level.

In its submission to Parliament's commerce select committee, the council recommended proceeds be distributed at council level rather than at ward or community board level.

The council submission noted that if pokie grants were given to the community from which they were raised, communities with no pokie venues - Otago Peninsula, Saddle Hill and Strath Taieri - would miss out on funding.

The council's first preference was that pokie proceeds be distributed by the New Zealand Lotteries Commission, "because that would get rid of that area of conflict", Cr Kate Wilson told the Otago Daily Times.

Cr Wilson, who signed the submission which is yet to appear before the council's planning and environment committee, which she chairs, said if the council ended up distributing gaming, then it would require funding to do so.

"It costs money to give away money."

In Dunedin, a part-time role (0.5 full-time equivalent) was employed to administer the distribution of $200,000 in community grants, and the estimate distribution of $12 million in pokie grants would require "significantly more resourcing", the submission noted.

A gambling report by the Problem Gambling Foundation reveals the largest grant in the city was $605,556 from the New Zealand Community Trust to the Dunedin City Council.

The grant was the largest local body grant in New Zealand for 2010, and was for the artificial turf system at the Forsyth Barr Stadium.

Submissions on the Bill closed last month, with the DCC supporting the intent of the Bill and the submission by Local Government New Zealand (LGNZ).

Invercargill Mayor Tim Shadbolt, who sent his own submission on the Bill, said the reform of the pokies sector "was of one of the most difficult area I have come across".

"You take on those trusts, you take on the president of every darts club and every bowling club in the country, they will really mobilise . . . so it takes a lot of courage."

Mr Shadbolt said he did not support the LGNZ lotteries model, as smaller communities would struggle for funding, and he was concerned about the impact on local licensing trusts.

"But all this will heat up the debate on gambling, what it does to people and families ... that whole issue will come out if it."

Martin Cheer, chief executive of New Zealand's oldest gaming trust, Pub Charity, said in the trust's submission, the Bill would hand distribution to local councils at a time when there were calls for "a renewed focus on core services".

The Bill could require 67 local councils to establish their own gaming trusts, "creating a potential conflict of interest for councils who will control licensing, operation and distribution of funds".

Architect of the Bill, Maori Party MP Te Ururoa Flavell, said he was unsure how many submissions were received before last month's deadline, but understood gaming trusts had been active in encouraging submissions from affected parties.

• Bendigo had the most Dunedin venues with nine, housing 124 pokies.