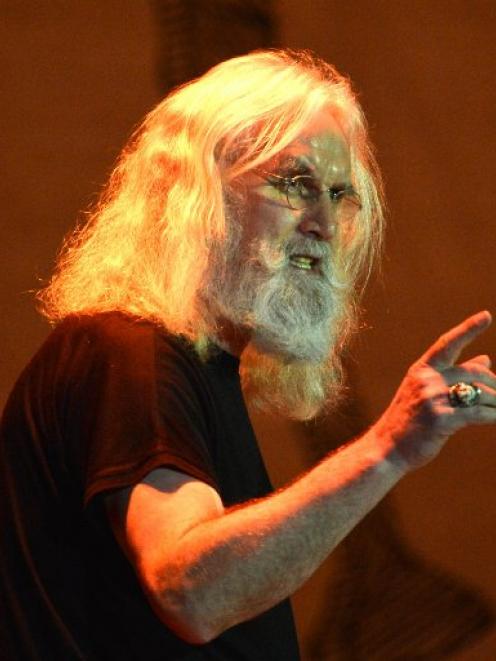 Billy Connolly's show is like hearing St Paul sharing the naughty stories he heard at the Pearly Gates. Photos by Peter McIntosh
Sold-out signs usually accompany Billy Connolly shows in this neck of the woods.

And last night was no exception at the Dunedin Town Hall.

There is something joyous and intoxicating about the irrepressible Scot New Zealanders find irresistible.

Connolly doesn't so much give sacred cows a nudge as lead them out on stage by the nose and ritualistically slaughter them.

The Big Yin rode into town yesterday on his High Horse Tour with a swag of new yarns.

''Sometimes true stories are funnier than made-up stories,'' he confided.

The 2300-strong capacity crowd in the town hall was in no mood to argue.

The show was a haphazard affair, littered with anecdotes, jokes and regularly punctuated by a black-clad Connolly enthusiastically pacing the stage to illustrate a point.

At times he was like St Paul sharing all the naughty stories he had heard at the pearly gates.

The 71-year-old is a master of the combustible pause - that moment where your body is starting to convulse with a laughter that your funny bone knows is coming, but hasn't received yet.

Connolly did not spare himself from his borax-coated barbs, candidly sharing the lighter side of his recent battles with prostate cancer and Parkinson's.

''Parkinson's is like being followed by a stranger who's coming to get you,'' he revealed.

His revelations about sex on the wrong side of a prostate removal operation are not suitable for a family newspaper.

The two-hour highland jig included a lesson on the etymology of some very rude swear words and many genuinely side-splitting moments.

''There was a guy in Scotland who loved his wife so much, that one day he almost told her.''

Connolly's timeless charm and appeal is that he remains, at heart, a Glaswegian shipyard welder entertaining his workmates with dirty stories at smoko time.