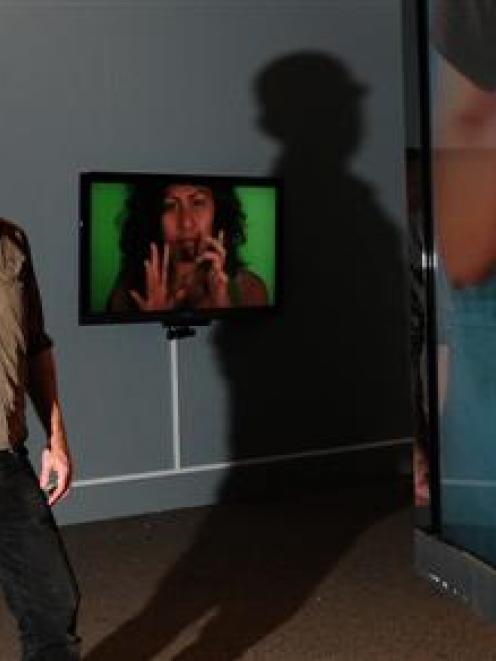 Auckland new media artist James Charlton triggers one of several interactive screens (foreground) at a "Bodytok Quintet" show he was helping install at the Otago Museum yesterday. Photo by Craig Baxter.
Plenty of humour awaits visitors at a touring show which opens at the Otago Museum today, focusing on the sounds people can generate, using only their own bodies.

Music has often been thought of as something generated only by musicians using musical instruments.

The word Bodytok was derived from a Melanesian-pidgen term 'toktok,' meaning to have a conversation.

The sounds reflected "the endless invention of the human instrument", he said.

Visitors can engage with each performer through the screens that play surprising and original noises produced by about 45 people, including musician Chris Knox, who volunteered to take part. Each screen responds as a visitor approaches, initiating a body-noise performance.

The show's interactive software design was undertaken by another collaborating artist, James Charlton, who is also a senior lecturer at Auckland University of Technology.

"People smile when they come into this [show] because its funny," Mr Charlton said.

He enjoyed standing quietly to the side and watching people interacting with the screens.

They also started to think a little more about their own bodies and were making their own little non-verbal noises.

The humour 'brings people in, it makes them feel at ease", but the show did have a serious side, encouraging people to think a little more about the sounds their bodies could generate, and several other things.

The show runs until November 25.