Tills were ringing flat out for many shops as more than 6000 passengers from Norwegian Jewel and Explorer Dream cruise ships flooded into the city, joined by shoppers vying for the best deals. 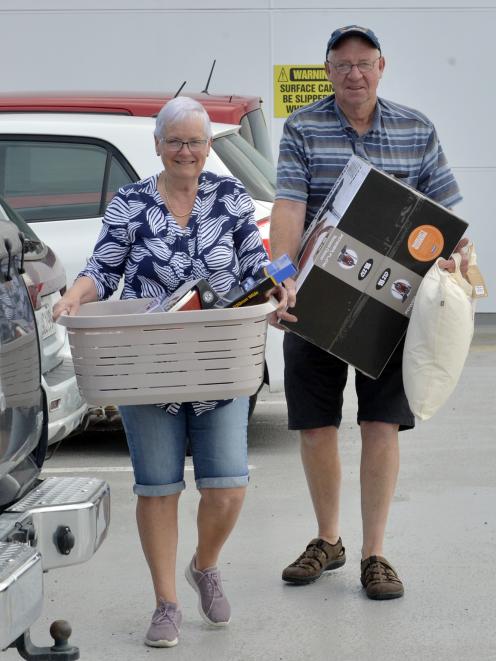 Leaving the shop with more than the two frying pans they anticipated are Janis and Neville Waters, of Balclutha. PHOTO: GERARD O’BRIEN
Decjuba store manager Saraiya Davies said the store had almost quadrupled what it would usually make on a good day.

"It’s been crazy. We have beaten what we made on Boxing Day last year by a lot, so I’m very happy."

She said the position of the shop, near the front of the Meridian Mall, had a steady stream of people coming.

"We’ve had hundreds of people through. Twice a year we have a 50% off sale, so that definitely helps.

"We’ve got all of our team members here except for one today. We were prepared for a day like this."

While the exact figures spent in Dunedin will not be known until today, Paymark figures last year show Otago spent $9.4million on Boxing Day, a more than 11% increase in underlying sales on the previous year.

Rata Jewellery owner Vicky Clifford said her shop, based in the Meridian Mall, had recorded a flat-out day.

"We’ve had probably 10 times the amount of sales we’d get on a normal day.

"It hasn’t been as busy as Boxing Day last year for us but would be the second busiest in the past five years."

She said she only had a small amount of items on sale for Boxing Day, but still had many people call in at the shop, manned by her and a shop assistant.

"No-one loves working retail on a day like today but it’s been a good day for us.

"I’ve had people pop in and tell me they received a piece of our jewellery for Christmas, which is nice to hear."

Balclutha couple Janis and Neville Waters came away with more than they bargained for during the sales.

Mr Waters said he and his wife were visiting friends and popped in to Briscoes only for two green frying pans.

He said the sales were well worth the special trip and they bought items at up to 60% off.

"We got a lot more than we anticipated, but it was all stuff we needed so we’re happy.

"Looking at the lines in the shop I thought we’d be there until next Christmas, but they moved quite quickly."

The pair did not venture further into the city, as it was far too busy, Mr Waters said.