Brace yourself for more gales 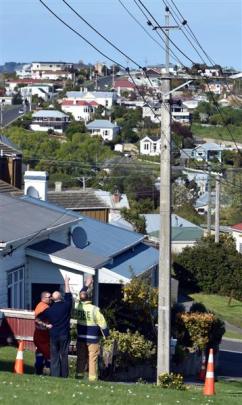 Strong winds are set to continue across Otago today, with the MetService predicting gales of up to 130kmh this morning.

Power was restored after about two hours.

MetService meteorologist Lisa Murray confirmed gale-force winds of up to 68kmh were recorded on the Otago Peninsula yesterday.

Swampy Summit, just north of Dunedin, recorded winds of 105kmh, while winds of about 80kmh were recorded around Dunedin city.

Strong westerly gales of up to 130kmh were forecast around Otago this morning but were expected to ease late this afternoon, Ms Murray said.

Dunedin could expect winds of between 110kmh and 120kmh, and up to 130kmh in exposed places.

Mr Ballard said Delta was keeping a close eye on weather forecasts as it worked to fully restore its network.

PowerNet chief executive Jason Franklin said fewer than 100 people were still without power in Southland and Otago as a result of strong winds on Sunday and Monday.

That was down from the 11,000 who were without power on Sunday evening, Mr Franklin said.

Mr Franklin said the conditions had stretched the company's resources but it was prepared to deal with any further disruptions.