Brand new house put up in a trice 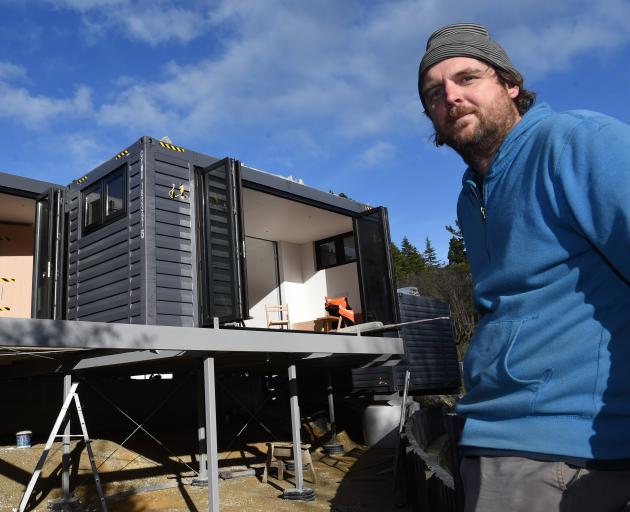 ''The speed of building is a bonus, but it's the quality, appearance and efficiency of build which I'm more interested in,'' he said.

Given possible difficulties at the site, and the garage partly overhanging part of Lindsay Creek, this would have been a ''really challenging building'' to have put up by conventional means.

Having four years ago visited the huge Chinese factory where the bamboo-floored, but largely steel, aluminium and glass house was manufactured, Mr Mann's long journey to a new house speeded up greatly this week.

On Monday at 1pm, at the Knox St, North East Valley site, the first of four containers arrived and was lifted into position by mobile crane.

The other containers quickly followed, and the 75sq m single-level house, with two bathrooms and two bedrooms and a 25sq m garage, rapidly started taking shape.

This is the first Ecotech Homes modular house to be put up in Dunedin, another having been put up in Roxburgh about four years ago.

Ecotech is a New Zealand company, and its Nelson-based chief executive officer and founder, Tony Frost, a builder with 40 years of experience, was hard at work on the house this week.

It was manufactured in China, combining the benefits of mass production at huge Chinese factories with his own Kiwi design and ingenuity.

If built by conventional means, the house would have taken about two and a-half months to construct, he said.

Fourteen years ago, Mr Frost decided there was a better way to produce affordable houses, both in volume and at pace, than the normal way in this country.

He also believed that Ecotech houses could help overcome New Zealand's housing shortage, and many thousands of modular houses a year could be built in China.

During manufacture at each of two massive factory sites in China, a modular house was completed every 56 minutes, delivering cost-effective solutions and safe, dry, and robust accommodation.

Such modular houses were not cheap but were cost-competitive propositions, built well above the New Zealand building code, including over insulation, and earthquake performance, Mr Frost said.

They could be quickly moved by crane to even challenging, difficult-to-reach sites, and the modules could be stacked on top of each other to create multi-storey accommodation buildings, he said.