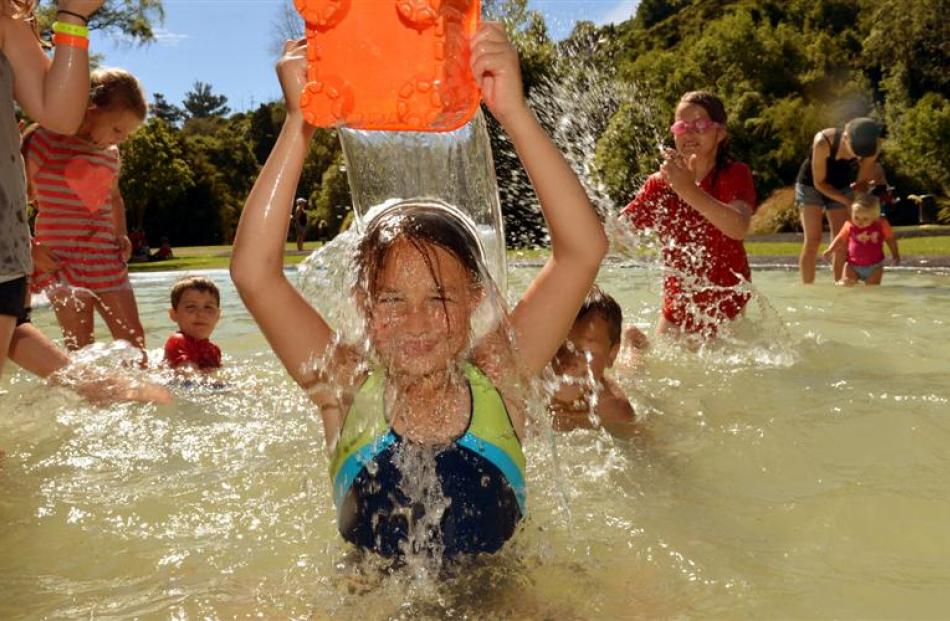 Jalizza Cockburn (9) enjoys a dip in the Woodhaugh Gardens pool yesterday along with a throng of other children. Photo by Stephen Jaquiery.

A sweltering night led to another hot summer day in Otago yesterday - the 11th day out of 12 when the region recorded a temperature above 20degC.

Alexandra, Cromwell and Middlemarch recorded the top Otago temperature yesterday of 31degC and Balclutha and Queenstown the lowest at 25degC.

Temperatures in the region sat around 20degC overnight - Alexandra was 22degC at 6am, Dunedin city 21degC at 1am and the airport 21degC at 4am. Queenstown dropped to the low teens, with 13degC at 6am.

Local bodies are keeping a close eye on the fire risk and water supply levels.

Niwa climate scientist Brett Mullan said the only day in the past 12 to dip below 20degC in Dunedin was last Thursday, when a high of 17.5degC was recorded.

By Wednesday, Balclutha had recorded 256 hours of sunshine in January. A record 304 hours was recorded in 2008.

Raineffects hydrologist Dave Stewart, of Dunedin, said while Otago was starting to dry out and rivers were dropping, the rain and the lack of wind earlier in the month meant the effects of the hot spell had not ''kicked in'' too fast.

''We've only had two weeks [of hot weather], but what a two weeks it has been. It has been great.''

Otago residents should make the most of the sunshine, as two fronts are expected, one at the weekend and another on Monday.

''Other than that, there is no rain on the horizon,'' Mr Stewart said.

Otago Federated Farmers president Stephen Korteweg said farmers expected this time of year to be drier and were ''reasonably well-poised'' for any weather conditions.

Contractors were kept busy across Clutha with a run of about 10 days of good weather, allowing silage and baleage to be cut.

''To get some nice, settled weather has been great,'' Mr Korteweg said.

Ophir farmer and official Niwa weather recorder Sam Leask said it had been consistently hot lately, but it was far from a record.

''I have not seen for a long time so many consistent days over 30[degC]. It has been five days in a row now and yesterday [Wednesday] was the hottest at 31.''

However, four or five years ago, temperatures consistently reached the mid-30s and, to top it off, there was a drought.

''This year is a bit better 'cause we've had miles of rain, so there's plenty of feed in the paddocks.''

In Invercargill, residents had been basking in a similar run of warm temperatures and sunshine. Maximum daily temperatures had been greater than 20degC on all but one of the past 10 days. The maximum topped 27degC yesterday and 25degC on Wednesday.

Mr Mullan said only 22mm of rain had fallen in Invercargill in the 11 days to Wednesday.

The dry spell and blue skies may be over in Southland. Showers were forecast for last night and this evening.