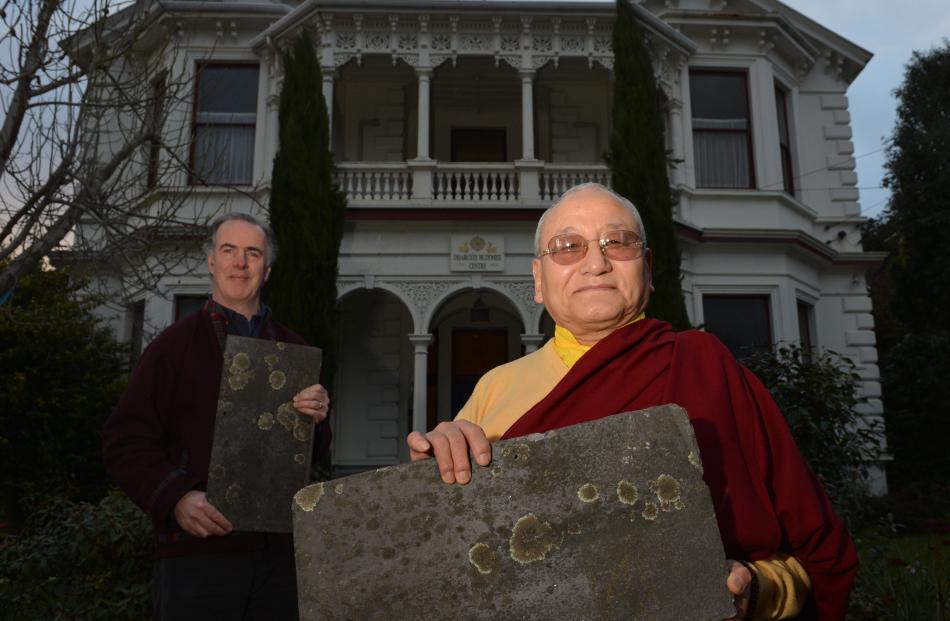 Buddhists are looking for signs from above, which are threatening the future of the Dhargyey Buddhist Centre, in Dunedin.

The slate roof of the historic Royal Tce home is crumbling, after 135 years of defying the elements.

''We've had four ceilings come down. A ceiling came down over a bed last year and it was just fortunate that no-one was in the bed,'' founding member Cathi Graham said yesterday.

''We can't just leave it any longer. It's too dangerous.''

Buddhists around New Zealand had rallied to save the building, with $60,000 of donations, and a conservation condition report had been prepared, centre director Peter Small said yesterday.

''The slate roof is at the end of its life. All the valleys are now rusting out and the original nails are rusting through one by one, causing water ingress and damage to the top-floor ornate ceilings.

''As slates are installed from the bottom up, this requires the complete removal of all the slates on any planes to be tied down. That is virtually all of them.''

''We really want to do it in a permanent fashion. These ones lasted 135 years, so it would be good if we could make it last another 100 years.''

Dhargyey Buddhist Centre was established in 1984, after the Dalai Lama advised his close friend Geshe Ngawang Dhargyey to come to Dunedin.

''It's because of the Dalai Lama that the centre exists,'' Mr Small said.

''It's a historic building designed by New Zealand architects and it's historic and sacred to Buddhists, because of the quality of religious instruction and the monks who have come here since 1984.''

The Mason and Wales-designed house was built in 1878 and later owned by confectionery producer Richard Hudson.