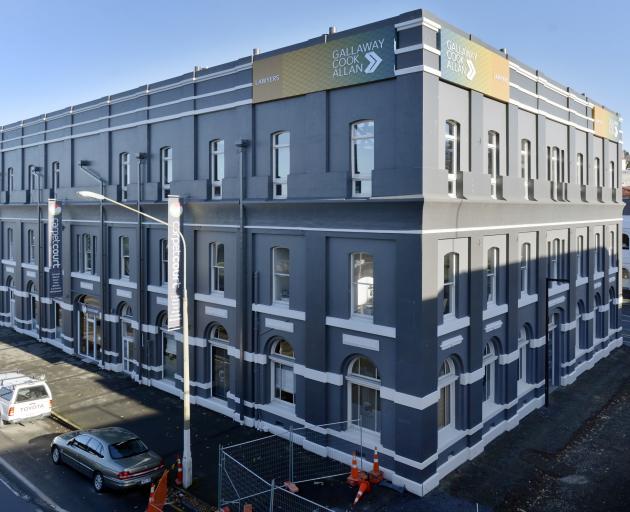 The 123 Vogel St second-storey windows at the heart of an Environment Court case in Dunedin. PHOTO: GERARD O'BRIEN
The owner of an award-winning Dunedin warehouse precinct building has been called to face the Environment Court in a case he described yesterday as ``vexatious''.

The court action calls on 123 Vogel St owner Chris Barnes to remove windows on the second floor and replace them with a design applicant Dunedin businessman John Evans says should have been built under the building's resource consent.

Mr Barnes has questioned the intentions of Mr Evans, and the court documents ask who Mr Evans is representing, and whether he is ``receiving funds from a third party''.

Some people involved would not speak on the record but one claimed property interests in ``the big end of town'' were behind what they saw as an attack on the precinct.

Mr Evans yesterday would not respond to questions, saying he did not want to litigate the matter through the newspaper.

Work ended last year on a major facelift for the 128-year-old building. It included an arched entranceway and a three-storey atrium, transforming it into a mix of office space, retail, hospitality and car parking.

The building received rates relief from the Dunedin City Council under its heritage provisions and has won awards since it was completed.

Law firm Gallaway Cook Allan moved there last year from a building on the corner of High and Princes Sts.

Mr Evans' application referred to a condition in the resource consent.

It said the windows were not what was agreed to, option one of four suggested.

The documents said the building owner should be required to ``remove the non-complying second-floor windows which are to be replaced with windows that are consistent with option one ...''

Documents from the respondents and the council and former council staff said the building was consistent with the consent, and did not need to change.

``Diligent investigations from the respondents since these proceedings were served have revealed nothing about Mr Evans' interest in the windows at 123 Vogel St.''

Investigations were under way into whether an application for security of costs should be made.

To avoid that, Mr Evans' counsel was asked to file an affidavit explaining Mr Evans' interest in the windows, whether he represented anyone else and ``whether Mr Evans is receiving funds from a third party''.

Council heritage policy planner Glen Hazelton, who now lives in Perth, said in his affidavit he originally supported option one.

After meetings with Mr Barnes and Heritage New Zealand, he modified his view, although option one stayed in the consent decision. That was a mistake, but it was clear from other memorandums he had written at the time it was not the option he meant.

Council senior planner Campbell Thomson said the windows were ``consistent with the overall scope of the consented activity''.

``I consider any works to give effect to option one would be futile and would not enhance the heritage value of the building.''

Mr Barnes said the windows needed to be extended downwards because they were originally too high, and occupants could not see out of them.

Option one would have had a new sash and two panes of glass, instead of what was built.

That had three panes of glass, kept the original sash and slotted a new sash underneath.

Mr Barnes said when the work was being done, a prototype window was developed and Dr Hazelton and building control staff visited the site and approved the design before the rest were completed in March last year.

He heard nothing about opposition to the design until more than a year later.

Mr Evans' affidavit said he had several conversations about the windows with council staff.

Mr Barnes said: ``I was unaware of any of this conversation between Mr Evans and the council until I was served with papers to appear at the Environment Court.

That happened in April this year.

He said at no point had Mr Evans or the council ``taken it upon themselves to address this issue''.

``I consider this vexatious and small-minded,'' he said of the court action.

There had been 8000 people through the building at this year's Vogel Street Party and ``we didn't receive one negative comment''.

Mr Barnes said the court action had consumed ``an enormous amount'' of the council's time and money, as well as his own.