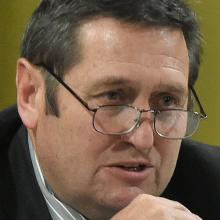 Gerard Collings.
A new ticketing system for buses will be introduced in Dunedin and Queenstown next year and will mean a "quantum leap" in technology, and benefits for bus users.

He was commenting after a consortium, comprising the Otago Regional Council and eight other councils, recently announced the planned new ticketing system would go ahead between January and June next year.

Consortium governance group chairman Mike Garrett, who is the Waikato Regional Council chief financial officer, said the councils had worked together as a consortium to secure the new system, to replace the current ageing ticketing technology.

The Invercargill and Nelson city councils and the Northland, Waikato, Bay of Plenty, Horizons, Hawkes Bay, and Taranaki regional councils are the other members. Working together to gain a new provider had meant "cost savings for our ratepayers" and would also bring "big benefits" for passengers, Mr Garrett said.

After competitive tendering, the ticketing contract had just been awarded to INIT, an international transport technology provider with extensive experience in "ticketing and transport  solutions worldwide", he said.

The new tag-on, tag-off card system will be rolled out by June next year, on the public transport networks administered by the councils. Passengers will be able to check their balances and top up the credit on their cards online.

Mr Collings has chaired the consortium’s technical working group, which undertook negotiations for the provider contract.

The ORC’s significant role in the ticketing work over the past two years had been a "vote of confidence" from other consortium members, he said.

The new contract had provided a "clear direction", but a "heck of a lot of work for local staff" still had to be done.

Details had yet to be determined, but the ORC was likely to be among the first councils to implement the new system, and Queenstown’s system would be introduced at the same time as, or "within a few weeks" of, Dunedin’s, he said.

Dunedin bus users group co-president Alex King welcomed the ticketing changes, which would give passengers more flexibility in their travel, with correct travel zones charged automatically, through the card system.

Mr Garrett said the new system would also produce "rich information" about how passengers travelled on the network, and Mr King hoped this specific detail, including on the popularity of individual bus stops, would help improve transport planning.

As key funder of the new system, the NZ Transport Agency has been involved throughout the process.

I sincerely hope that they are buying an existing working system and not like two Aussie cities who developed their own which were both abject failures for a considerable time.
Eg One was awarded to a US company and it took nearly 2 years before system started to work anywhere near what it should and cost much more than originally allowed for.
Far better to buy an existing working system and adapt it to suit your local area

Canongate/Russell St buses have been cancelled and no amount of 'technology' will benefit the bus users who live there. How could the ORC do this to the people that live in this high density part of central Dunedin?