'Business as usual' for Emerson's 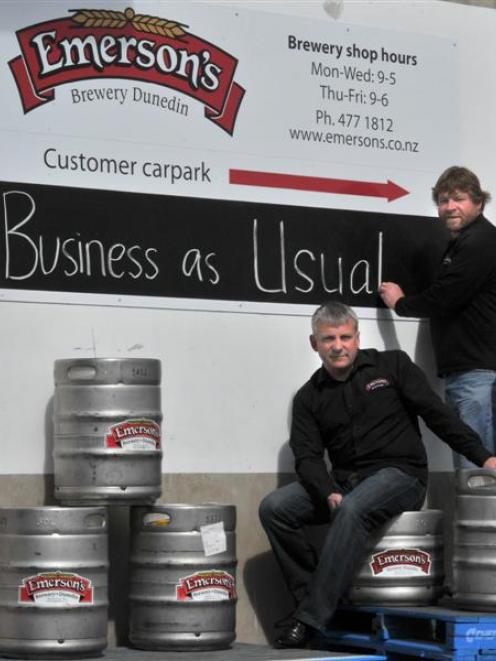 Emerson's Brewery founder Richard Emerson.
Emerson's Brewery has been sold to Lion New Zealand, with the promise it will be business as usual for Dunedin's most recognisable craft beer brand.

The sale, for an undisclosed cash sum, will take effect on November 30.

Otago Chamber of Commerce chief executive Peter McIntyre said the sale was a "signature of success" and showed how successful companies operating in Dunedin could attract global attention.

"I don't see it as a bad thing at all. It is a natural progression for a successful business looking to expand," he said.

Reports from the North Island suggested some bars would stop stocking Emerson's because of the overseas ownership issues.

However, the owner of Dunedin's Albar, Steve Collins, said he would still stock Emerson's beer in both Albar and his Portsider Tavern, in Port Chalmers.

"It is a very popular beer. We hope the sale won't discourage people from drinking it. We are told it is business as usual and nothing will change, but you just don't know with the big breweries," he said.

Emerson's founder Richard Emerson said in an interview he had come a long way in 20 years, but there was further still to go.

He and general manager Bob King had developed a strategic plan for expansion, but it needed capital.

Emerson's had contemplated following the lead of Moa, a craft brewer which was seeking a listing on the NZX. In the end, the board decided to accept an offer from Lion with the assurances it would be business as usual.

"To move forward, we needed capital from existing shareholders. That was difficult. We have made the right choice."

When shareholders were told of the offer for the brewery, they asked two questions, Mr King said.

One was about the future of the beer and the other was about staff.

Messrs Emerson, King and brewing manager Chris O'Leary would retain the day-to-day running of Emerson's operations and all other roles within the business would remain unchanged.

The present staff of 12 would remain, with the prospect of more being employed as the brand expanded.

Lion saw the value of the beer as the brand, Mr King said.

Mr Emerson said it was important to Lion to continue brewing Emerson's in its Wickliffe St brewery.

Speight's, also owned by Lion, was spending around $29 million redeveloping its Dunedin site, but Mr Emerson ruled out Emerson's being brewed on Speight's Rattray St site.

"They want to encourage people here, to make the pilgrimage to the brand.

"Dunedin is the home of Emerson's."

Asked about his reaction now the news was being made public, Mr Emerson, who founded the brewery 20 years ago, said it was good to feel valued and appreciated. He had been assured of the freedom to keep brewing not only his signature beers, but also the specialty ones like the latest Trooper's Stout.

It was also pleasing the 16 loyal shareholders had been rewarded for their support over a long period. The shareholders were friends and family.

"It's been a great ride but we have another journey to go," Mr Emerson said.

McDuff's Brewery in Dunedin is also for sale, although a deal could be some way off, co-owner Gavin Duff said yesterday.

The company was "quietly" put on the market earlier this year, Mr Duff said.

There had been some interest in the company, which employed three staff, but a sale would be pushed next year.

Mr Duff said he and co-owner Graham Jenkins were "both 65" and the time was right.