Call for guardrail on corner after series of car crashes 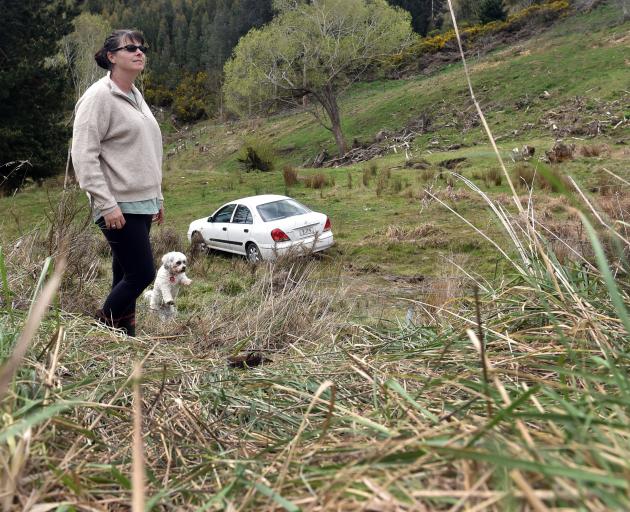 Nicki Powell, of Mosgiel, with dog Lily, surveys the damage after a car crashed into her property this month. PHOTO: PETER MCINTOSH
For most people, a car crashing on to your property would stick in the memory, but for one Dunedin woman the event has become so commonplace she has lost count.

Now, Nicki Powell, who lives on a bend in Morris Rd, Kinmont, near Mosgiel, is terrified somebody will be killed if a guardrail is not installed.

Ms Powell said she had lost count of the number of crashes on the corner since she moved to the property eight years ago.

The latest incident happened earlier this month, when the driver of a car heading towards Mosgiel lost control and crashed through the fence and into Ms Powell’s paddock.

‘‘It was rainy ... It’s always terrible when it’s wet, so we’re just sitting here and the young lady’s dad comes and knocks on the door and just said his daughter’s gone through the fence.’’

While she was not sure what had caused the most recent crash, Ms Powell said speed had been an issue in the past.

The driver of the second most recent crash was a very lucky young man.

‘‘The young fellow ... snapped the lamppost, T-boned the gate, took that with him into the paddock and ended up on his side in the paddock, so I do think speed had to be a bit of an issue.’’

Ms Powell had contacted the Dunedin City Council after previous crashes, and she said it had been proactive about trying solutions.

A stand of trees on the inside of the bend had been felled to improve visibility for drivers, speed reduction signs had been installed on the corner and the road had been resealed with a coarser surface.

Still the crashes come, and Ms Powell said she would like the council to install a guardrail on the corner.

Council group transport manager Jeanine Benson said her department was aware of several crashes in the area in recent years, and confirmed the measures previously taken to ameliorate the situation.

This has already resulted in a noticeable improvement in the safety of this stretch of road.

There were no plans to install a guardrail, but the road surface would be watched for deterioration and upgraded if needed.