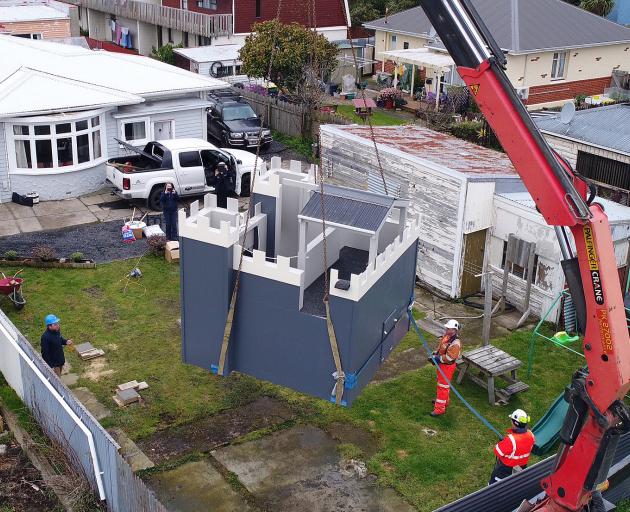 Isaac Stocker shows off his new fortification, filled with Make-A-Wish staff and the tradesmen who built it and craned it into the backyard of his parents’ South Dunedin property. PHOTOS: STEPHEN JAQUIERY
A man's castle is his home.

So, within seconds of discovering Make-A-Wish New Zealand had built a 3m-high castle for his back yard, Isaac Stocker put two rules in place.

Rule one: If the drawbridge is up, ring the door bell.

Rule two: If you are invited in, please remove your shoes.

The 7-year-old was diagnosed with Hodgkin's lymphoma last year but, after a few months of chemotherapy, he is now in remission and his prognosis is good. 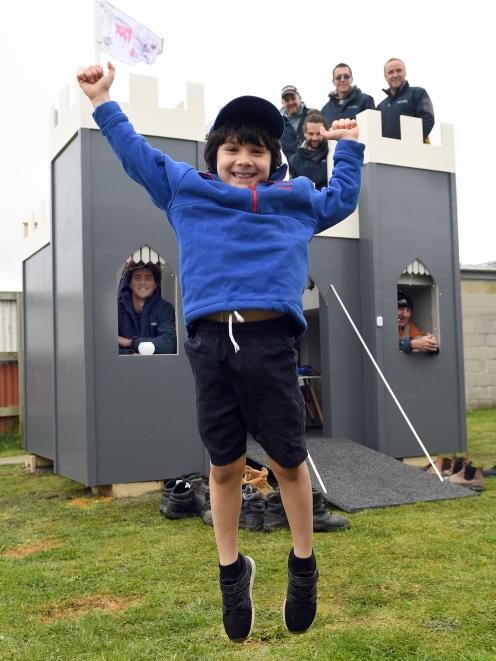 His mother, Tamsyn Park, said being diagnosed with cancer had been quite traumatic for Isaac and his family, and the castle was a great way to help him recover psychologically and physically.

Isaac's wish for a "kid-sized" castle had its roots in a birthday present he received when he was 5.

She said he loved to play with toy soldiers and his grandfather built him a toy castle to stage battles around.

When Isaac asked Make-A-Wish if he could have a castle he could play in, he was not content with just any old building.

He designed it himself, complete with solar-powered lighting, Nerf guns, a slide for quick escapes, and a bucket on a pulley system that allowed his parents to deliver snacks without having to climb the stairs to the top floor.

Construction was supported by Mico Dunedin.

Builder Paul Kirby was one of many local tradesmen who helped put the castle together and have it craned it into position yesterday.

He said it was an emotional moment, watching Isaac's face light up when he came home from school to find a castle in his back yard.

"It's amazing. A very special feeling."

Make-A-Wish New Zealand was established in 1986, and aims to grant life-changing wishes for children with critical illnesses.

Since then, about 2000 wishes have been granted across the country.

Watch out the council don't hear about it, they will order it pulled down because of compliance.