Castle St bridge to be rejuvenated 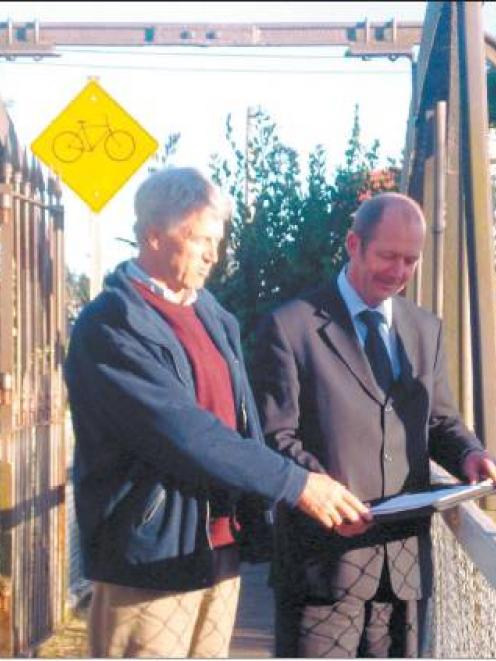 Extreme makeover: Dunedin Botanic Garden team leader Alan Matchett (left) and Duffill Watts manager Jeremy Shearer discuss the renovations about to be undertaken on the Castle St bridge. The bridge will be closed for up to two months.
Users of the Castle St bridge at the Dunedin Botanic Garden will be getting a bit more exercise than usual during the next two months. The bridge will be closed for renovations starting on July 30.

Botanic Garden team leader Alan Matchett hopes users will not be too inconvenienced by the closure.

‘‘It will have a definite impact on how people will move through the gardens, but I hope they will understand."

Weather permitting, the renovations will be completed within the allocated two months.

However, Mr Matchett assured users of the bridge will be kept informed of developments.

‘‘If there are any changes we will let people know as soon as we are able.''

The detour options during the closure are either the Leith track from Dundas St or the footpath on Cumberland St. The renovations will include replacement of the decking and wooden support structure, repainting the steelwork and upgrading the railings. The total cost of the project is $70,000, which will come from the Botanic Garden's capital works budget.

‘‘There was a proposal to replace the structure but the costs and timing weren't prudent to carry on at this stage,'' Mr Matchett said.

The bridge was built in 1933 to '34 and has undergone minor maintenance through the years, with the last being the addition of an anti-slip surface.

Jeremy Shearer, the manager of Duffill Watts, which has the contract to repair the bridge, said he hoped by using hardwoods and longer-lasting surfaces, the bridge would not only maintain its historical detail but would not need further work for eight to 10 years.

Mr Matchett and Mr Shearer agreed the renovations should not deter people from visiting the Botanical Garden this winter.

Other maintenance being undertaken in the gardens includes the installation of stormwater drain, installation of a foul sewage drain in the upper gardens and automation of the Winter Gardens ventilation system.