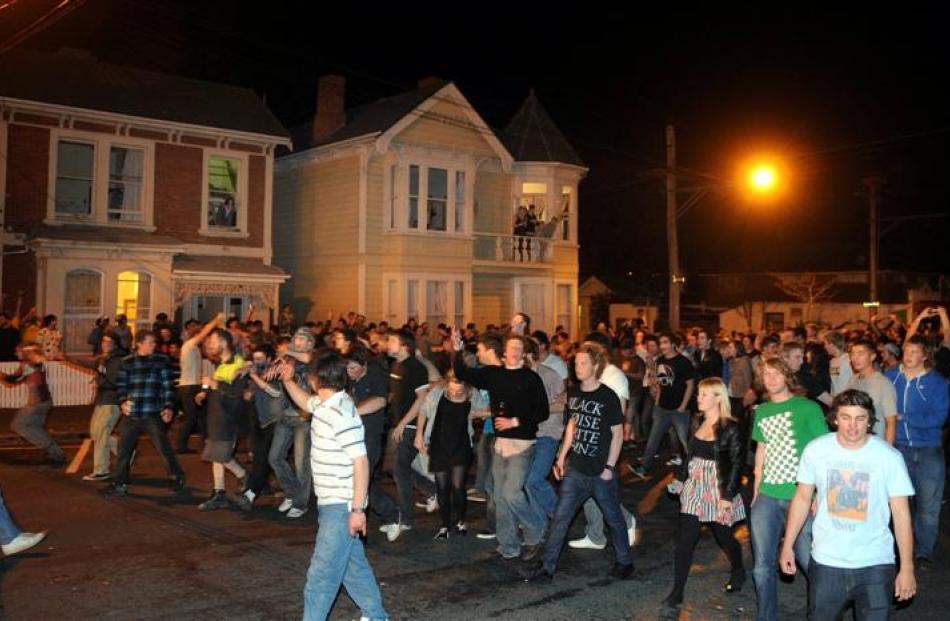 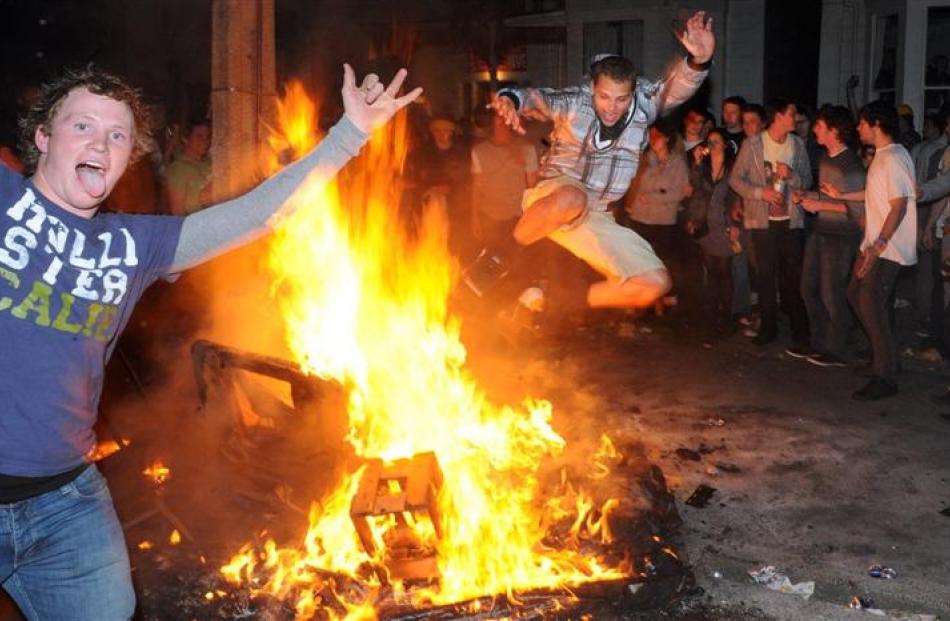 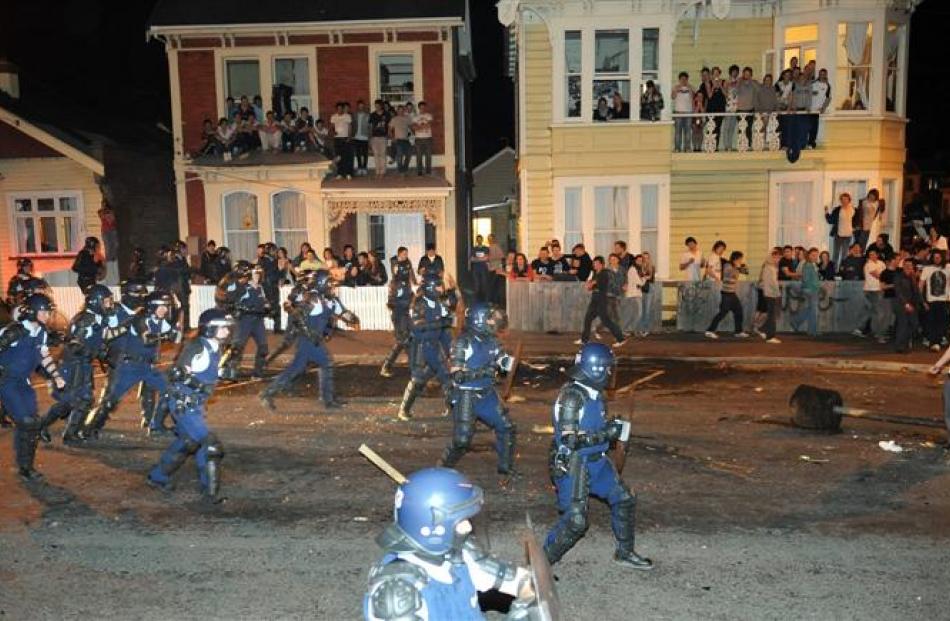 Police in riot gear advance on the crowd about 1.20am. Photos by Stephen Jaquiery. 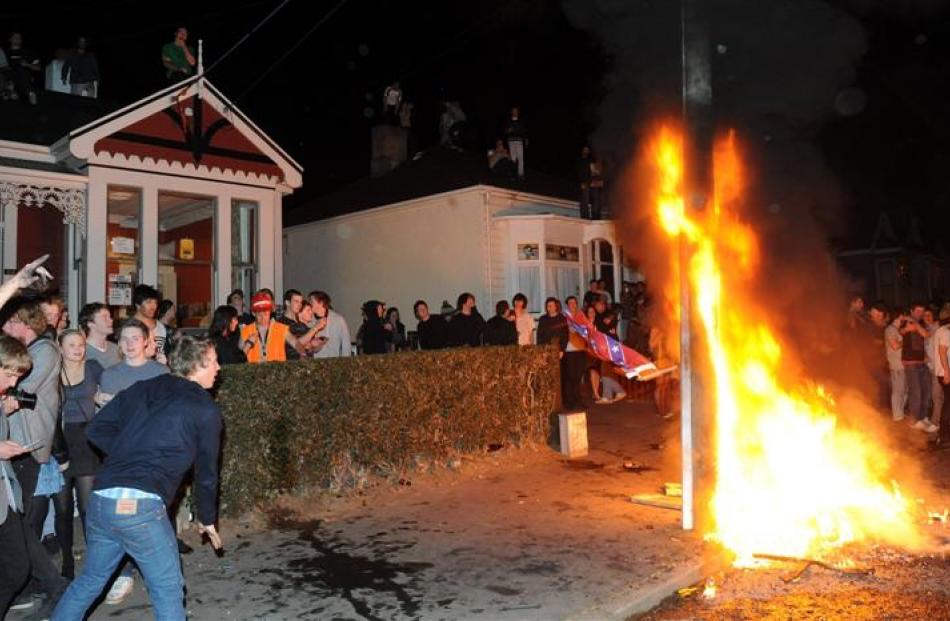 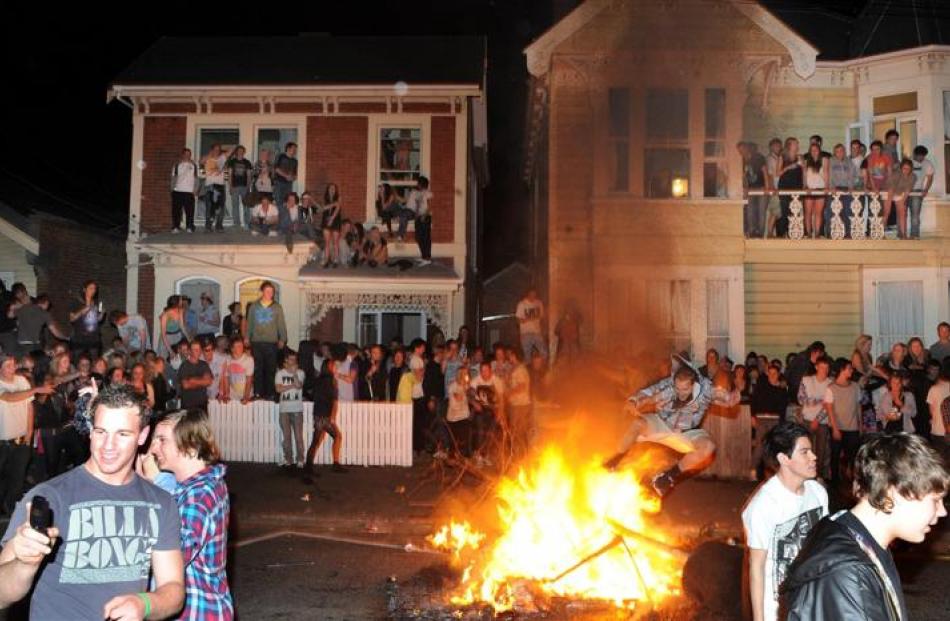 Chaos reigned again in Castle St in Dunedin's student area last night as hundreds of drunken young people set fires, threw bottles at police and ripped out trees following the arrival of the Undie 500 rally in the city.

More than 500 people, many of whom had been drinking in Castle St student flats since midday, forced a large number of police to retreat about 11.30pm as they pelted officers and cars with bottles and debris.

They chanted "ole, ole, ole" as they fuelled two large rubbish fires at either end of the street.

Fire Service staff kept watch from a distance, choosing to let the fires burn out rather than have firefighters enter the area.

About 12.30am, around 40 police officers wearing helmets, visors, protective padding and carrying batons and shields lined up eight abreast outside the Gardens Tavern on Castle St.

They were joined by about 30 other police in rows either side.

Officers stood calmly as they were pelted with more bottles and after about 15 minutes the crowd dispersed to another fire set further back on Castle St.

At that stage, the officer in charge of the operation, Inspector Alistair Dickie, said police were relatively pleased with the way things were going.

"We are happy we have been able to stabilise the crowd without exerting our authority too much."

He said police had chosen to take a softer approach this year.

"We could have sparked something here. We are pleased at the moment. Hopefully, I don't eat my words."

By 1.27am, 10 Dunedin people, two from Waimate and one each from Taupo and Invercargill had been arrested in relation to the disorder.

The gathering was an unlawful assembly and police had filmed the night's events and intended to identify people who would be charged, Insp Dickie said.

Three team policing units from Christchurch, two from Invercargill and some officers from Central Otago had been called in.