David Brown has been a pillar of support for Dunedin's firefighters for 25 years.

His service as chaplain for the city's fire crews since 1994 was acknowledged yesterday with a special ceremony at the Dunedin Central Fire Station.

He was presented with a medal - but if you ask him, he believes he has received more from the organisation than he has given over the years.

They had helped with several fundraising efforts he had been part of, and once, when he went on holiday, he returned to find they had painted his house. 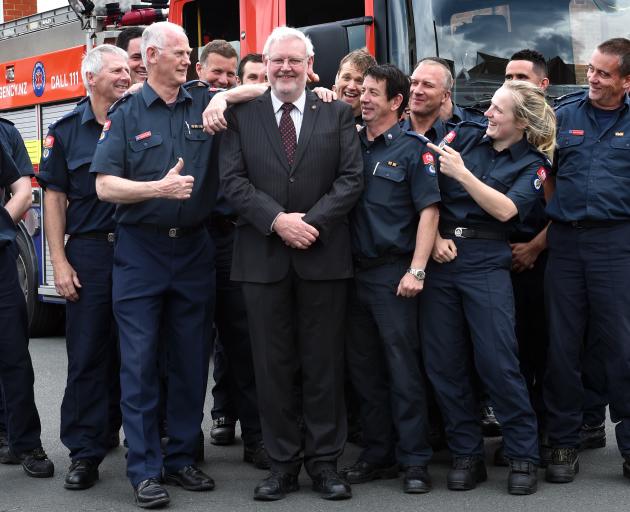 There was plenty of support for chaplain David Brown at a ceremony acknowledging his service at the Dunedin Central Fire Station yesterday. Photo: Peter McIntosh
''They've been very, very good to me,'' he said.

''The friendship that I've had over that time has been very precious for me.''

When he first started his role, ''they were going through a lot of political industrial action, so that was interesting times''.

And, when he happened to be at a station when a callout came through, he was often able to jump in the fire truck and head out with them.

''I sit in the middle at the back, and it's been really good too, I don't take that kind of thing for granted.

''I quite enjoy that sort of thing, as every little boy does.''

He visits fire stations in the city twice a week, making himself available for anyone who wants to speak to him.

''They're pretty good at looking after each other,'' he said.