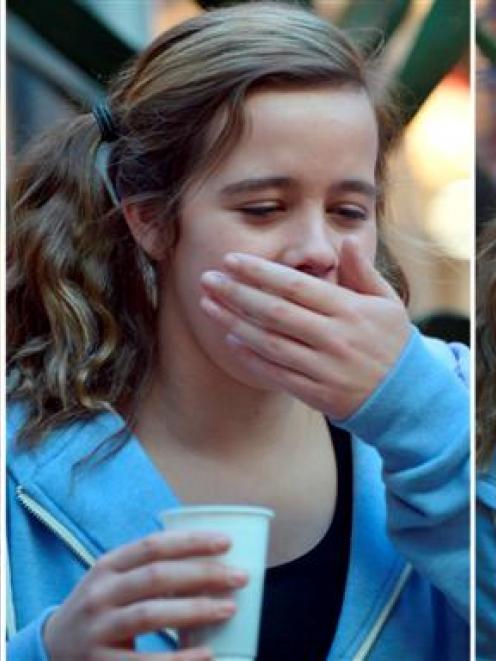 Jess Chisholm (14), of Dunedin, sips deer pizzle consomme at an offal food science demonstration in Wall Street mall, Dunedin, yesterday. Photo by Peter McIntosh.
Deer pizzle is not often used in cooking, and a group offered some as a soup yesterday could tell you why.

They were at an offal food science demonstration at Wall Street mall, Dunedin, yesterday, where deer pizzle, or penis, was on the menu.

Chicken liver pate, pressed tongue, crumbed sweetbreads (glands in the throat), devilled kidneys and a deer pizzle consomme were presented to the crowd.

Mr Lane said deer pizzle was "not usually used in a culinary sense" so became the base of a soup. Its "musty, gamey flavour" added a "hint of deer" to the dish.

Michelle Whittaker said the consomme looked "disturbing" and she did not like "the idea of drinking penis".

She and her son, Aidan Mullenger, enjoyed the sweetbreads, though, which "looked like chicken nuggets".

Jess Chisholm brought herself to sip the soup and described it as "interesting".

Ingrid Christiaans downed an entire cup of it, saying it "tastes like beef".

Her favourite, though, was "the sweetbreads, but the tongue was OK, too".

Dr Mirosa said there had been a "resurgence" in "nose-to-tail eating" as offal returned to the dinner table. However, many people did not eat it "for a range of reasons", largely that it "grosses people out".

"What we do when we eat meat is we try to dementalise what we are eating, which is easy with a chop, but offal looks like an animal; brains look like brains and tongue looks like tongue."

Dr Mirosa said there were ways to encourage people to eat offal, thereby reducing food waste, including moving it out of the pet food section at supermarkets, including recipes with products, and selling it in ways that "made sense" to consumers, such as cutting it into stir-fry strips.