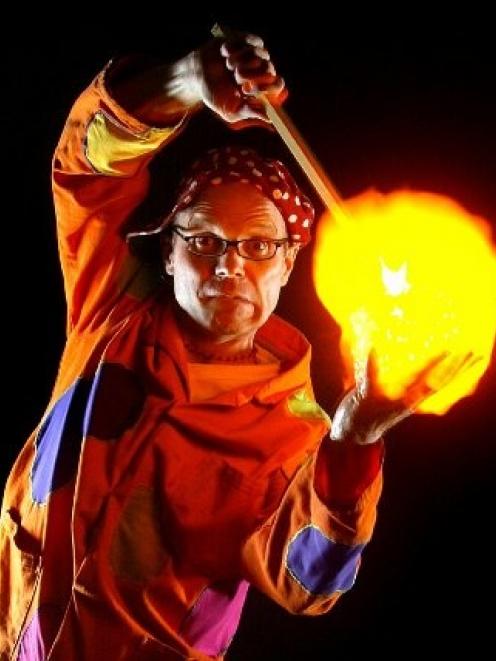 Stunt scientist Tom Pringle. Photo by Douglas McBride.
A Scottish stunt scientist who specialises in unusual experiments has been confirmed for this year's New Zealand International Science Festival in Dunedin.

Tom Pringle, also known as Dr Bunhead, describes himself as ''a performance scientist who likes showing off and blowing stuff up''.

He has Guinness world records for the most potatoes fired from a spud-cannon in three minutes and for making the longest glow-in-the-dark necklace, which was simultaneously worn by 108 people.

His other experiments include big indoor clouds and chocolate-powered flamethrowers.

''I'll be joyriding through the world of science using an anarchic blend of wow factor demonstrations, bringing audiences face-to-face with the silly, crazy, dirty, dangerous and magnificent side of science,'' Mr Pringle said.

The Edinburgh-based freelance science communicator has an international reputation as a pioneer of performance-science shows.

''My shows are especially suitable for anyone who hates, or hated, science at school and in each show I tease out some science explanations behind the everyday experiences and objects that we take for granted.''

He previously attended the 2000 New Zealand International Science Festival and festival director Chris Green said he was delighted to have him back.

''He takes everyday objects and turns them into 'a science-themed barrage of contraptions, whooshes, bangs and flashes' - to use his own colourful description,'' Mr Green said yesterday. The New Zealand International Science Festival will be held in Dunedin from July 5 to 13.

The full festival programme will be officially announced later this month, with tickets on sale from early June.

The festival has been held in Dunedin every two years since 1998, to celebrate science, technology and the natural environment.