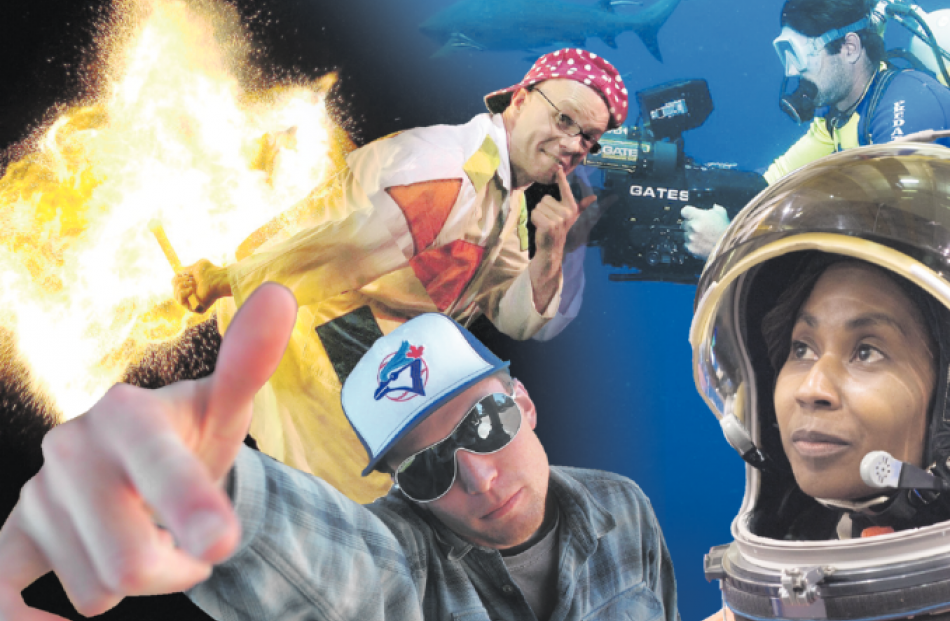 Expect the unexpected in Dunedin this week. The 2014 New Zealand International Science Festival will be another explosion of experimental fun. Nigel Benson buckles on his crash helmet.

Fact is stranger than fiction.

And it can be a lot more fun.

Seeing will be believing in Dunedin this week, as the white lab coats are cast aside and the colourful side of science is celebrated.

The New Zealand International Science Festival has brought everyone from astronauts to madcap boffins to Dunedin. Guests include an Edinburgh scientist who managed to smuggle a spud bazooka and nitrogen-cooled stunt bananas past New Zealand customs and an Australian performer who launches marshmallows out of a vacuum cleaner.

There will be dissections of everything from a great white shark to a human brain.

This is science like the naughty kids did at school, back in my day, with a bent on stunts, workshops and interactive demonstrations.

The festival has been held in Dunedin every two years since 1998, to let academics and ordinary folk share the same petri dish and celebrate science, technology and nature.

It was conceived by then-Dunedin deputy mayor Dame Elizabeth Hanan, who was inspired after visiting the Edinburgh International Science Festival in 1996.

''As a former secondary teacher in science, biology and chemistry, I realised that science needed to be seen and enjoyed publicly in a fun way,'' Dame Elizabeth recalled this week.

''The festival idea was modelled on the one in Edinburgh, which was held in the off-season to promote economic activity in the city. There were no other midwinter festivals in this city at that time.

''The links in promoting the university's key departments in science to the community at large were vitally important. The concept was to involve the whole community of all ages in a fun and engaging way,'' Dame Elizabeth said.

''If we want more scientists in this country, then we need to show that science is all around us and can be interesting and easy to understand.''

''The impact on Dunedin is huge. It builds on our strengths of science and education and excellence in research,'' Dame Elizabeth said.

Prof Jean Fleming has been involved with the festival since she became chairwoman of the first programme committee, in 1998.

''The festival aimed to put Dunedin on the map for its science and technology; both in New Zealand and world-wide,'' she said.

''We were keen to link tertiary institutions with the city better and to provide an interesting midwinter festival that would attract out-of-towners to Dunedin.

''I'm biased, but I think it has been extremely successful. The numbers attending have grown and grown and the benefit to both the science sector and Dunedin tourism have been huge. Midwinter is not a great time for tourism in New Zealand, but each festival brings more and more visitors to Dunedin, who all have to eat and sleep somewhere,'' Prof Fleming said.

Another bonus for the festival has been the establishment of the Centre for Science Communication, in 2008, which is now considered one of the world's leading science centres.

Prof Fleming has fond memories of early festivals, before such troublesome things as public liability insurance.

''For me, personally, the standout event has to be walking on hot coals. I treasure a photo of me walking the coals in the Octagon in 1998, with Prof John Campbell, who is holding a sign saying 'It's only physics, folks','' she said.

''This stands out for me, because of the audacity of this event. It was brave and the population flocked to watch and then participate. Small children skipped across the coals and those of us involved in the festival walked the coals several times. We stopped because the council was worried about health and safety, of course, but this event blew my mind, because it epitomised evidence-based, rational, decision-making in action.''

''Our lives are influenced, affected and inspired by science. We engage with it every day and we have to continue to introduce and engage young people and encourage their parents to support their children and encourage them to understand and pursue careers in science,'' she said.

''It's not all mad scientists in lab coats. It is the key driver behind New Zealand's economy and our position in the world. It can kill or save the planet and make our lives, easier, healthier and more enjoyable.''

It has also become a popular event with international scientists, such as celebrated botanist David Bellamy. ''We didn't think we had a show [of getting him], but we gave it a try and sent a fax to his home, as he didn't have email,'' Ms Cook recalled.

''Within an hour we received a fax back. He had hand-written a note in the margin of our fax. He said he'd be delighted to come over and take part, at no cost to the science festival.''

''It has built up a base of children, young adults and parents who know the importance of knowledge. Science is an essential part of our world and the festival shows why science matters.

''I think that NZISF has been hugely successful. The university and polytech have been opened up to families via the festival. I think that Dunedin now has a national reputation for being good at discussing science in public fora.''

The festival has also be an eye-opener for the organisers.

''I remember oceanographer Sylvia Earle saying that for a tuna to mature it needed to eat the same amount of biomass as 40 beef cattle, which blew my mind when thinking about how much we, as a species, are extracting from the oceans,'' Dr Coleman said.

This year's festival would be ''anything but boring'', 2014 festival director Chris Green promised.

''We have always been about showing why science is great, why it matters and why it is fun. But this year, more than ever, boring is 'out' and exciting, interactive events are in.

''We have maintained our goal of making most events free, so that no-one misses out. This year, over 100 of the 120 events are free.''

What's hot
The people behind the New Zealand International Science Festival pick some of this year's highlights.

Dame Elizabeth Hanan: ''There is so much on, we are all spoiled for choice. I am looking forward to the women in science breakfast, sponsored by the British High Commission, and the young women showcasing their research at Wall Street on the Tuesday evening.

''I am also looking forward to Dr Bunhead's show, the University Expo and taking the grandchildren to some of the workshops at the library. It will be a busy and stimulating week. I know my husband is keen to go to the Science of Whisky and Prof Terry Collins on sustainability.''

Founding programme chairwoman Prof Jean Fleming: ''The Science of Whisky, on Monday night. The Chemistry Big Bangs show is always not to miss. I am looking forward to Ryan Johnson, trying to persuade me I need to love sharks and, especially, to Terry Collins, the Green Chemist. Mind you, James Piercy's story of his recovery from brain injury looks interesting, too. I go to everything, of course.''

Founding director Caroline Cook: ''I'm looking forward to the return of Dr Bunhead. I note it's not an R-rated show this time, but I am sure his performance will be as funny, entertaining and mad as ever.''

Festival president Dr Michele Coleman: ''I am really keen to see Terry Collins the Green Chemist. He is talking about how we make chemicals that are less toxic for our natural environments. Also, I am very keen to hear James Piercy talking about recovering from a severe brain injury and what happens in the brain, using himself as an example.''

Festival director Chris Green: ''I am looking forward to James Piercy, who has a very personal story to tell about the impact of science on his life and his unique perspective. I am also looking forward to the marine science day in a new and different venue, by the waterfront.''