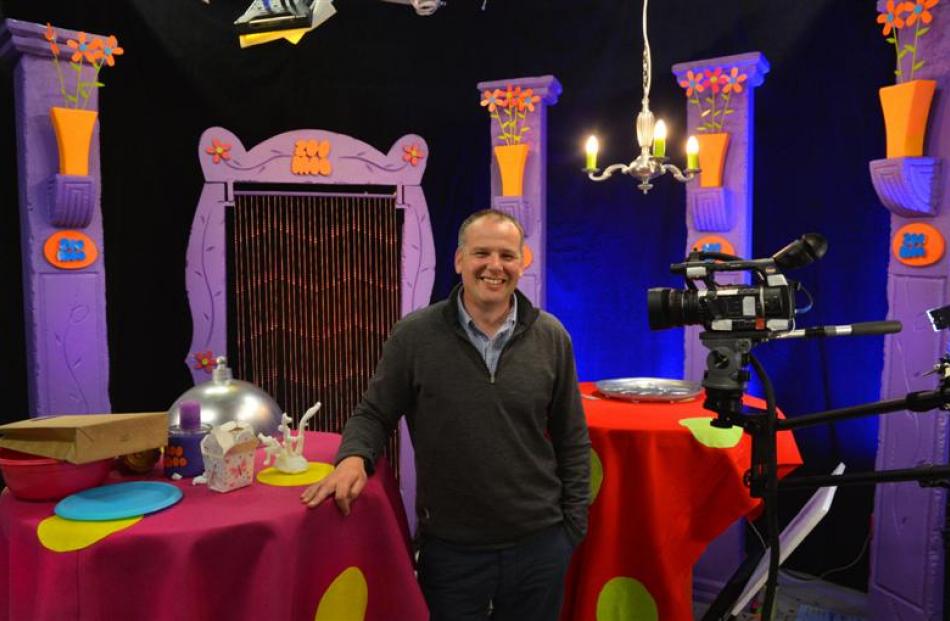 NHNZ managing director Kyle Murdoch, on one of the sets being used in a new television channel the company is about to launch. Photo by Gerard O'Brien.

Dunedin's NHNZ is preparing to take on the likes of Disney with the launch of its own international children's television channel.

NHNZ managing director Kyle Murdoch said, in preparation for the launch of the channel next February, 54 staff were hard at work in Dunedin producing content for it.

About 40 were new staff who had joined the office since the middle of this year.

The educational children's channel, aimed at 3 to 6-year-olds, had already had a ''soft'' or trial launch in Brazil, and would expand to Asian markets next year, Mr Murdoch said.

After that, the aim was to launch on as many platforms as possible, including eventually on New Zealand television, either on Sky or Freeview.

''We want to make sure that this channel is like Disney or Nickelodeon. We are going for broke.

''We want to make sure that this is on every single platform that there is,'' he said.

The upcoming launch made it an ''exciting'' time to work at NHNZ, as the number of television hours being produced increased from an average of about 40 to 50 hours a year to 210 hours.

The opportunity to launch the channel was largely created by a change of ownership, when former Fox executive David Haslingden bought the company outright from Fox International Channels last year.

''What he brought with him was this ability to create channels. He started off with Star in Asia when they just had a few channels and he grew the whole business to hundred of his channels.''

This gave it ''much more potential to grow''.

''It's like the next version of NHNZ. It's like NHNZ version 3.1 in a lot of ways, version one being when we were part of TVNZ, version two being when [former managing director] Michael Stedman took over and gave us a new lease of life, and this is another step.''

While a departure from NHNZ's previous work, the channel had links to the company's heritage and would have a focus on natural history, utilising its extensive library of animal footage.

It would also air programmes using animation and puppetry, which were being filmed in the NHNZ building.

Children would also able to interact with programmes on the channel using tablet computers - known as ''second-screen'' technology.

''It is very different from anything else that is being done on the market.''

If the launch was successful, there was the possibility of more growth at NHNZ.

''There is a tendency and a trend to not just have a single channel. You would branch out and have multiple channels and have a channel business as well.''

Given the large size of NHNZ's building, it had no trouble housing the extra staff, but this could change if there was further expansion.

No matter how much the company grew, its ''core'' would always remain in Dunedin.

Launching the channels in Asian markets was in keeping with the company's focus on the region.

''Michael Stedman, who was CEO and retired at the beginning of the year, he was a real visionary and he saw this need to expand into Asia and get investment from places like China and Singapore.

''We are just sort of building on what he started.''

Other exciting projects were under way at NHNZ, including the co-development with a Korean company of technology to transfer two-dimensional film into three dimensions.