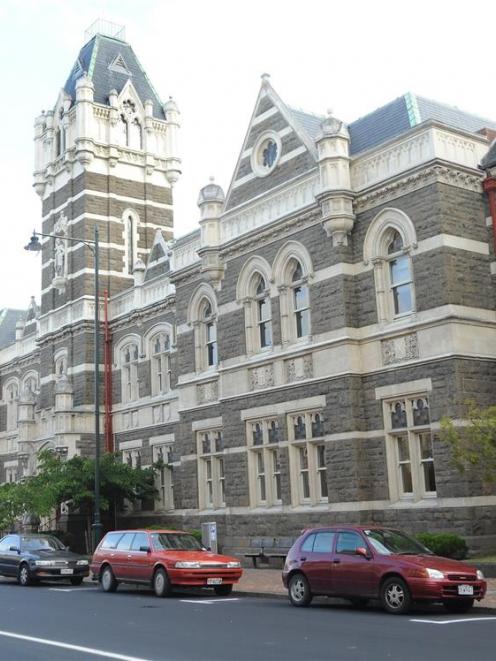 The business case, delivered to Cabinet by Justice Minister Amy Adams last December, was released to the Otago Daily Times under the Official Information Act this week.

While all financial data was redacted from the report, what remains paints a clear picture of the compelling argument to save the courthouse.

It showed the Ministry of Justice investigated four key options for the courthouse's future. -

1. To strengthen the courthouse to 34% of New Building Standard (NBS) and return services.

2. To strengthen the courthouse to 60%-70% of NBS and return services.

3. To extend the leases of the city's rented court facilities and sell the historic building.

4. To extend the leases of the city's rented court facilities and "defer remediation'' of the historic building.

The business case promoted Option 2 - strengthening the courthouse to 60%-70% of NBS and returning services - as the preferred option.

It provided the best value for money as it ensured a "seismically safe, sound and renovated courthouse ... at only minor additional whole-of-life costs''.

Abandoning the courthouse was argued against in the report.

The ministry believed it would struggle to sell the courthouse, leaving it with "an under-utilised asset'' needing ongoing maintenance.

The ministry also took into account Dunedin's response to the courthouse's plight, the report shows.

It cited "strongly held local views'', including those of the Dunedin City Council, the legal profession, local media and the wider Otago community, "that court functions should return to the Stuart St site as soon as possible''.

"The issue has been the subject of numerous local campaigns. Therefore, Option 2 will best satisfy the significant community and stakeholder concern over the Stuart St complex.''

The report said one of the risks of not adopting Option 2 was the expected "ongoing action and pressure from the local community to reverse any decision to permanently vacate Stuart St''.

The building's heritage value would be at risk if it were not invested in, the report said.

There was also a "reputational risk to the ministry and the Government'' as previous indications from former minister of courts Chester Borrows, reported in the ODT in 2013, had indicated the building would be reinstated.

Dunedin barrister and historic court campaigner Anne Stevens said the business case's references to Dunedin's reaction to the saga showed the "power of the people''.

"It is so empowering; it's so good to be heard and listened to. That's what democracy is about. It's just empowering in itself that it works like that.''

The ministry's concern that community action would be "ongoing'' if the courthouse was not restored was an accurate assessment, Mrs Stevens said.

"There's no way we would have given up. We were always going to get it. It was just how many forms it took, and what strategies were employed.

"The campaign would have continued. Because we live here, we're the citizens of this town, this is our courthouse and we know what's best for our city.''

● Ministry of Justice staff will visit Dunedin next month to discuss the next steps in the process.

The business case showed planning and other associated work was expected to take 43 weeks and the restoration and strengthening work another 53 weeks.