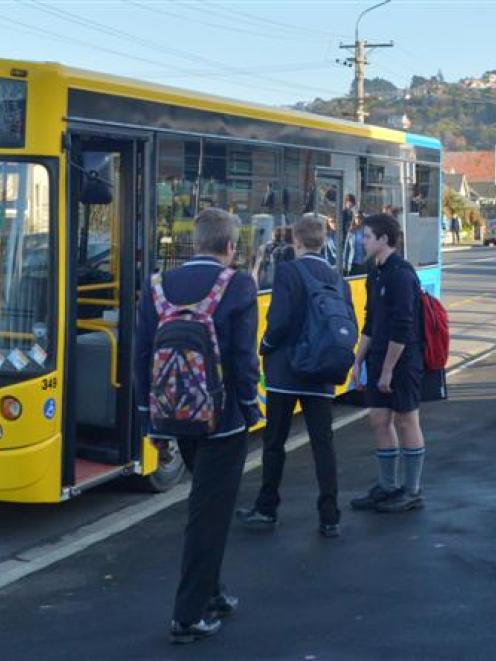 Dunedin's bus service is set for sweeping changes that may lead to faster and more direct routes away from smaller residential streets.

The draft Otago regional public transport plan includes a central-city hub for a system set to cost more than $100 million in the next decade.

The changes will mean in Mosgiel, for instance, 15 different routes will be merged into just one.

Across the city, a seven-zone fare structure could be cut to three zones.

The plan has been developed this year by the Otago Regional Council, along with the Dunedin City Council, the New Zealand Transport Agency, the Queenstown Lakes District Council and bus companies.

The draft plan covers the Otago area, but the bulk of the changes are in Dunedin.

That includes a new ''rapid network'' alongside the more regular network.

The rapid network will cover the central city, Dunedin and Wakari hospitals, the tertiary precinct, stadium and Botanic Garden.

The plan is expected to go out for public consultation this week.

It has attracted mostly positive reactions from companies and a bus users support group.

But the regional council says the changes will mean some people will have to walk further to their nearest bus stop.

And it plans to cut its eight school bus routes, though the new system is expected to be able to deliver pupils to their schools.

The change does not affect school bus routes run by other agencies.

The regional council has managed the city's public transport system since 1989, but is involved in discussions with the city council to hand over control.

Under government legislation, the regional council was required to put the plan together, so it could tender for new or replacement services.

Several contracts with bus companies expire in June next year and in June 2016.

The plan noted ''many shortcomings'' of the Dunedin network, which was ''extremely complex'' and slow.

One aspect of the draft plan was a central hub for all services. That would reduce the number of buses in the central city at any one time.

Mr Collings said the council was ''exploring options'' for a site, a discussion that would be held with the city council.

There were options, but he said it was too early to identify them.

The hub could include buildings, or be as simple as a bus stop area on the street.

The idea was to allow people to transfer from bus to bus.

Another aspect of the plan was using main roads more and residential streets less.

Mosgiel patrons would have to use a link service to get to the one route that would service the township.

Council support services manager Gerard Collings said people would have to decide on the effect of the proposed changes.

He said the purpose of the plan was to reduce the reliance on public subsidies for the system.

''It may mean some people have to walk a little bit further,'' he said.

But there would be more certainty about where the bus would go and travel times would be ''a lot better''.

''However, there will be some hardship, and Bus Go Dunedin will be vociferous in supporting any people who would end up isolated far from bus routes by this suggested change.''

Ritchies Otago regional manager Malcolm Budd said the changes would mean the same operator would run a route days, nights and weekends, rather than the old system where a route could be shared by two operators.

That had meant enticements like family passes could not be introduced, as they may not be honoured by another company.

The company was ''in full support'' of the plan.

The plan will go before the ORC tomorrow, with a recommendation it be endorsed for public consultation.