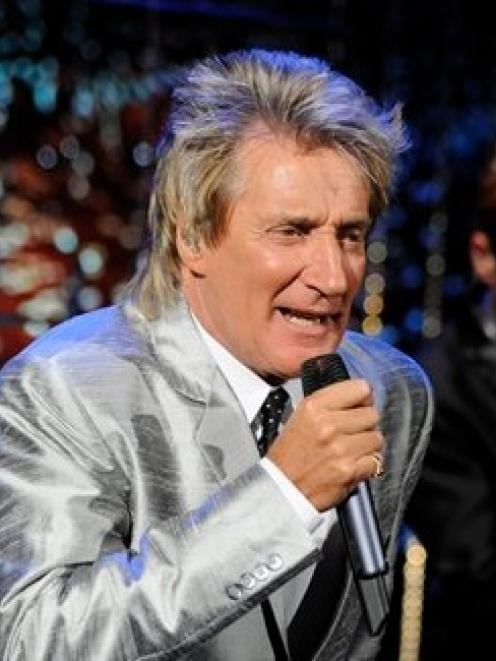 Rod Stewart plays Forsyth Barr Stadium in Dunedin tonight.
Promoters for some of the world's top musical performers say Dunedin is now firmly on the radar as a destination for a steady stream of headline acts.

The concert, being brought to Dunedin by Frontier Touring, has also attracted three of Australasia's top music promoters to Dunedin, eager to evaluate the event and the venue.

Together, the three Australia-based promoters represent acts ranging from Bruce Springsteen to the Foo Fighters, Miley Cyrus and Katy Perry.

Mr Coppel told the Otago Daily Times from Melbourne the speed of ticket sales for Fleetwood Mac's sellout Dunedin show, in particular, would cause the industry to sit up and take notice.

There had been some nervousness that staging the concert on a Wednesday night would hurt sales, but it now appeared a second show could have been considered, he said.

That was not possible due to ''availability issues'' elsewhere, but more big concerts were expected to follow in Fleetwood Mac's footsteps, he predicted.

''It's sold sensationally well ... I don't think anyone in the industry would have thought that Dunedin ever had the capacity to mount major concerts.

''I'm sure our competitors have sat up and taken notice ... and I'm sure it's going to lead to even more events coming through.''

Mr McGregor said word was already spreading and the city was now on the radar of promoters, agents and artists internationally.

''You find every time one of us promoters is going in to meet with an agent in Los Angeles, they're asking about it [Dunedin].

''We don't have to introduce people so much to the city - it's on the radars .. . I think you'll see more and more shows going through.''

That would include more acts aimed at a younger audience, which could see the city rivalling Auckland and Wellington as a destination ''within the next couple of years'', he said.

''I think you'll see artists of that younger demo[graphic] starting to line up to go through.''

Another successful show tonight would only further enhance the city's appeal.

''It's certainly on the way now, and success breeds success.

''If everything goes right, and the deal was right, would I go to Bruce Springsteen's people and say. 'We should play Dunedin'?

• The Otago Daily Times understands Stewart is staying at the Scenic Hotel Southern Cross in High St, and that he arrived on Thursday night.