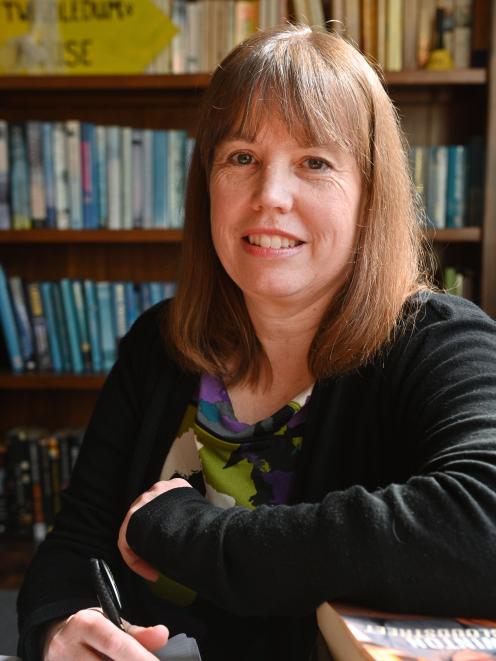 Dunedin writer Angela Pope said she was ‘‘thrilled and delighted, but also very honoured’’ to have won the prestigious prize. PHOTO: LINDA ROBERTSON
A tale centred on the lies a young woman tells to keep the painful truth at bay has won a Dunedin writer the 2020 Sargeson Prize.

Angela Pope said she was "thrilled and delighted, but also very honoured" to have won the prestigious prize for short story writing on Monday.

"I still can’t quite believe it, to be honest."

The 53-year-old’s story, Lies, is about Tracey, who has been injured in an accident.

"She’s a bit of a feisty character, and so when people notice that she’s walking with a walking stick and they want to know what’s wrong, she makes up imaginative stories about what might have caused her to get injured.

"There’s a lot of humour in it - a lot of black humour. It’s her way of dealing with it."

Judge Owen Marshall said he had no hesitation in awarding Lies first place in the open division.

"In Lies, the voice is strong, individual and persuasive and brings Tracey, the narrator, wonderfully to life - a young woman injured both physically and emotionally, but presenting a defiant face to the world.

Pope was among more than 800 New Zealand writers who used the Covid-19 lockdown in April to get creative and enter this year’s short story competition.

Named after celebrated New Zealand writer Frank Sargeson, the competition is sponsored by the University of Waikato and offers a top prize of $5000.

Pope gave a lot of credit for her win to the support Dunedin gave writers.

"I’ve really enjoyed being in a City of Literature where there is just so much going on for people who enjoy reading and writing."