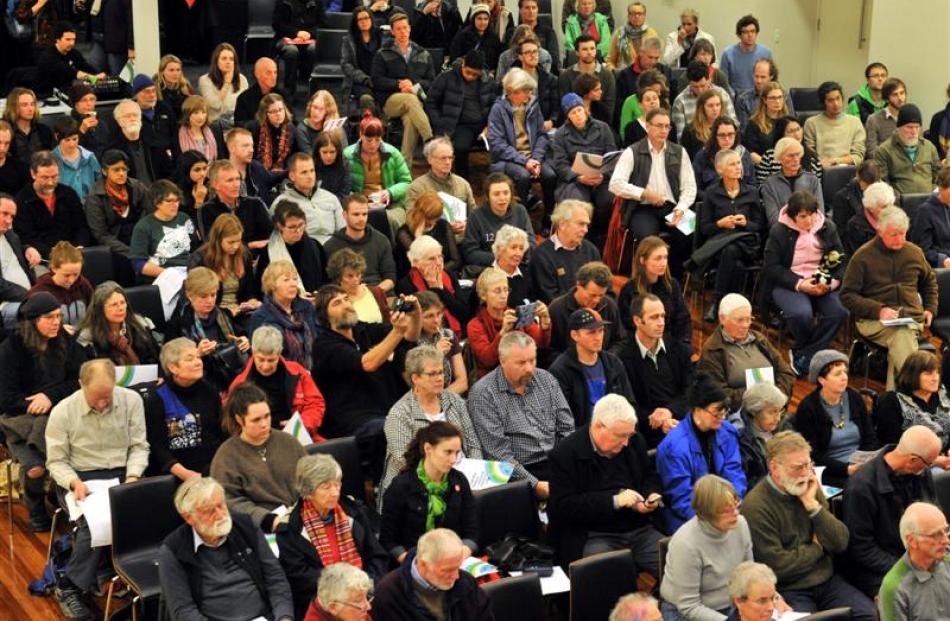 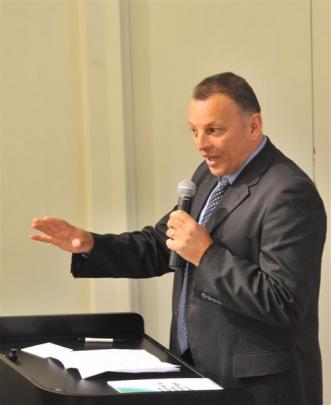 Ministry for the Environment operations director Mike Mendonca responds to a speaker.

Hundreds of people turned up keen to have their say on  climate change reform last night.

The meeting, chaired by officials from the Ministry for the Environment, was part of a consultation tour of 12 New Zealand cities on the target the country should adopt after 2020 as part of the United Nations Framework Convention on Climate Change.

The meeting, which ran for two and a-half hours, attracted about 300 people, with dozens expressing their views on New Zealand's climate change targets.

Almost every speaker was met with raucous applause, sometimes so enthusiastic it drowned out their message.

Bill Clark was the first member of the public to speak, and he was blunt.

''The Government needs to front up and start being realistic [about what emissions target it can meet],'' he said.

Later, Mr Clark stood up again, to express doubt about whether the ''mentality'' to make the ''radical changes necessary'' was present in the ministry, or even among his fellow audience members.

''There are a lot of people in this room who are very middle class,'' he said.

''You'd have to give up everything ... It's something you have to think about.''

Other topics covered by speakers ranged from the health risks associated with climate change to the possibility of climate change refugees flooding in from the Pacific islands.

One speaker, Marvin Hubbard, charged that the ministry's consultation documents focused too much on the potential economic costs of action on climate change.

''We're not facing an economic question,'' he said, ''we're facing a moral question.''

Saskia McCulloch, a recent master of international studies graduate, said it was ''disgusting'' and ''embarrassing'' that the New Zealand Government was ''subsidising the fossil fuel industry'' by giving oil companies tax incentives to prospect and drill in New Zealand.

Ministry for the Environment operations director Mike Mendonca acknowledged some of the concerns.

''I hear a theme that oil exploration and prospecting is not something we want to see,'' he said at one point during the meeting, drawing enthusiastic cheers.

After another speaker criticised the Government for spending more on the flag referendum than the climate change consultations, Mr Mendonca responded: ''I take your point''.

''Feelings about this issue are stronger than about the flag,'' he said, to another torrent of applause.

Green Party MP Julie Anne Genter stood up to acknowledge ''there's a lot of anger in the room'', asking audience members to ''maybe not take out so much anger on [ministry officials]''.

''It is our Government that's failing us,'' she reminded the crowd.

''I want to acknowledge the anger that's felt by my generation and people younger ... that the question of even having children is such a moral and ethical dilemma.''

Cr Jinty MacTavish said the target of a 40% emissions reduction by 2030 many people in the room were calling for - and which was criticised as being inadequate by Prof Bob Lloyd earlier in the night - was a ''compromise''.

Countries will meet in Paris to negotiate global carbon emissions at the end of this year, and ministry officials said at last night's meeting the Government hoped to have New Zealand's targets agreed ''well before that''.