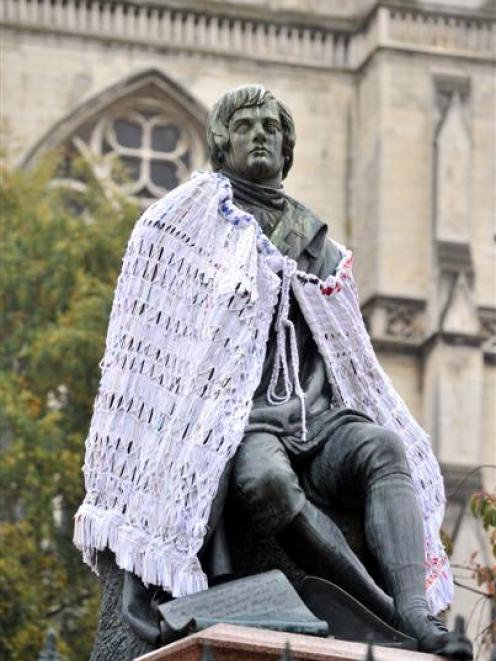 The installation, timed to coincide with iD Dunedin Fashion Week, is the work of zero-waste textile practitioner Fiona Clements.

Ms Clements will also be a panel member for Fashion Revolution: Who Made My Clothes, a discussion on ethical and sustainable fashion initiatives, which is part of the fashion week.

She said the korowai was hung on the statue yesterday, after six weeks of sewing and weaving strips of T-shirts. She had ''literally just finished it at 7am this morning''.

She had help from ''a whole bunch of friends''.

Fashion Revolution is an international movement that calls on the industry to respect people and the environment, as well as creativity and profits.

The installation highlighted the anniversary of the Rana Plaza disaster in Bangladesh on April 24, 2013, when the collapse of a garment factory killed 1129 people. The Who Made my Clothes discussion would be held on that anniversary.

Ms Clements was also calling on iD designers to be open about where their clothes were made and in what conditions.

She expected the korowai to stay in place until Monday.