Columba ex-pupils to study in UK 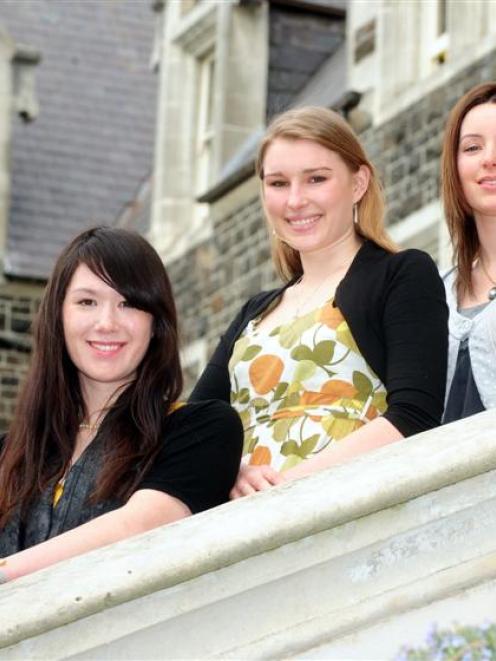 Former Columba College pupils (from left) Yani Hung, Emma Hutton and Dr Julia Matheson will continue their studies at England's Oxford or Cambridge Universities later this month. Photo by Craig Baxter.
Julia Matheson, Emma Hutton and Yani Hung have three things in common - they are former pupils of Columba College, like to go shopping, and later this month all three will begin their studies at England's prestigious Oxford or Cambridge Universities.

Dr Matheson (25) was a pupil at the school between 1994 and 2000, and is now a general house surgeon at Dunedin Hospital.

She recently won a 2008 Rhodes Scholarship to study for a doctor of philosophy degree in medical oncology at Balliol College, Oxford University.

She said the scholarship would allow her to work with mice in the university's laboratories to come up with new ways to treat bowel cancer and find possible cures.

The high rates of bowel cancer in New Zealanders was the inspiration behind choosing the topic, she said.

"I'm extremely excited. I did part of my medical elective at Oxford so I know what's ahead of me. It's an extremely stimulating environment."

The universities were two of the best in the world and were alluring for academics, she said.

"It's the combination of the tradition and history of the place. They are world-class facilities - you're getting the best of all aspects of university life."

Miss Hutton (18) won the 2008 Girdlers' Scholarship, regarded as the undergraduate equivalent of the Rhodes Scholarship, which will allow her to study music at Cambridge University's Corpus Christi College.

Since leaving Columba College in 2007, she has been studying music and French at the University of Otago.

However, the opportunity to study an artistic degree in a "cultural centre" of Europe would be "amazing", she said.

Miss Hung (18) is also off to Oxford (Pembroke College) to study medicine as an undergraduate.

But unlike the other two, she did not win a scholarship.

"I've promised my dad a nice rest-home because he's paying for my studies."

Miss Hung was delighted to be going to Oxford because winning a place to study there had been against all the odds.