A sign would be installed on the reserve with information about the "heritage" trees and when the fruit would be ready to harvest.

"The fruit will be available to anyone but ideally for the Caversham community," Ms Zeinert said.

The project was designed to strengthen the local food system and was funded by Enterprise Dunedin, she said.

Group secretary Shelley Linwood said the community group was established in 2013 and about 30 members met monthly.

The "pilot" orchard of 16 trees was  planted yesterday. 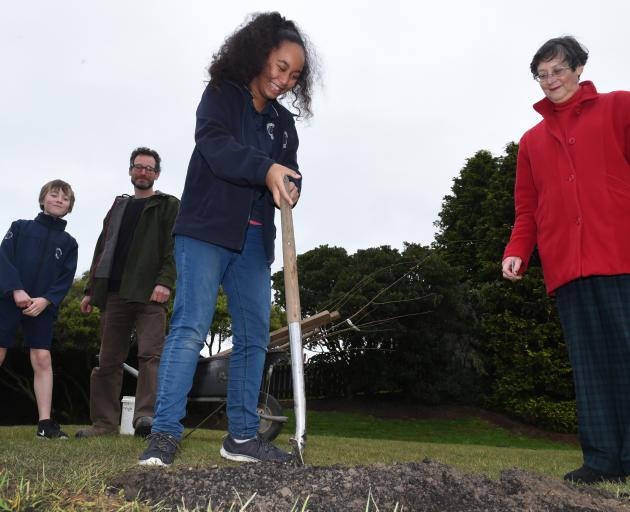 Carisbrook School pupil Myhani Vahua (12) digs a hole in which to plant a Billington plum tree at Caversham Reserve yesterday with (from left) fellow pupil Louis Roche (11), landscape designer Jason Ross and Margie Harris. Photo: Gregor Richardson.
The group had applied to make the reserve a "magical park" so people could download an app to play a virtual game including "chasing dinosaurs and kittens" across the green space.

"I’ve lived and worked in many different communities around the South Island but the Caversham community take the cake."

About 40 people attended the planting and the school’s kapa haka group performed.

At the planting, Margie Harris spoke about how, as a child, she went to the Caversham Croquet Club with her grandmother, Alice Graham, who lived to age 107, and recalled the women breaking from play to eat the food they brought to share.

"It was a gargantuan feast ... they would all sit around a long table and share the feast, which is what this is all about." 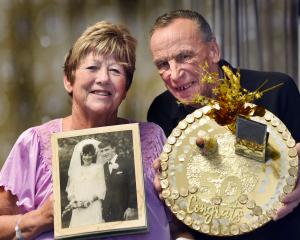