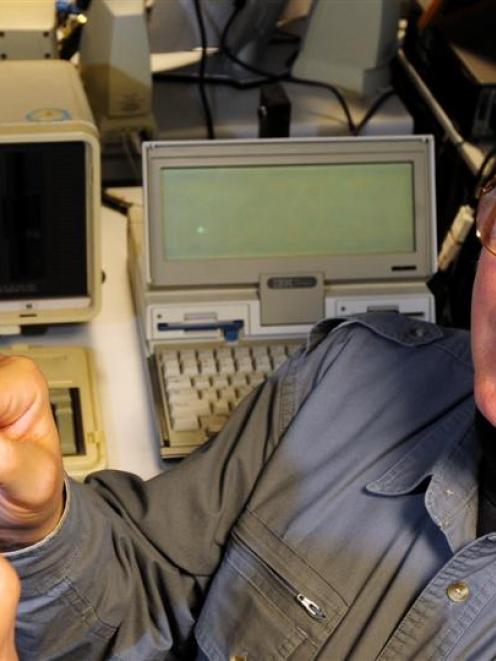 Associate Prof Hank Wolfe, of the University of Otago information technology department, holds an IBM computer punch card from the early 1960s, which holds up to 80 bytes of data. The modern flash memory card he is also displaying can hold more than eight billion bytes. Photo by Craig Baxter.
These days, University of Otago Associate Prof Hank Wolfe is even more excited about his career as a professional in information communication technology (ICT) than when he began 50 years ago.

Over the years, US-born Prof Wolfe, an internationally-respected computer security specialist in the university information technology department, has seen many huge changes.

One of the first computers he was involved with after beginning his career in the United States in 1959 was the IBM 1401 machine, whose sizeable punch cards could store only relatively limited amounts of data.

By contrast, a modern and much smaller flash memory card can hold more than eight gigabytes - eight billion bytes.

It would require a carefully stacked pile of punch cards 17km high to match the data storing capacity of a single eight gigabyte card, he notes.

Over the same half-century, computer processing power has also greatly increased - by up to about 1500-fold.

Prof Wolfe and his colleagues celebrated his 50th anniversary at a function on campus yesterday afternoon.

He pointed out that he was pressing on with his career and that his field's endless novelty remained a strong attraction.

"The thing that's been fun about it is it's constantly changing and you get to look forward to new things."

Prof Wolfe, who is also celebrating a 30-year career at Otago University, said another major change was the way in which almost every business had now become dependent on ICT.

The internet was often used for marketing and promotion, with computers also used for a host of internal functions.

A survey had shown that 60% of New Zealand businesses were aware of computer security issues and had taken measures to secure their ICT systems.

However, it was frustrating that about 40% of businesses remained potentially vulnerabto computer attack of various kinds, which could badly damage or even destroy some firms.

He was still active in research but believed his most important university role was as a teacher, a responsibility he took seriously.

"I've always been here for students and I continue to be here for my students."