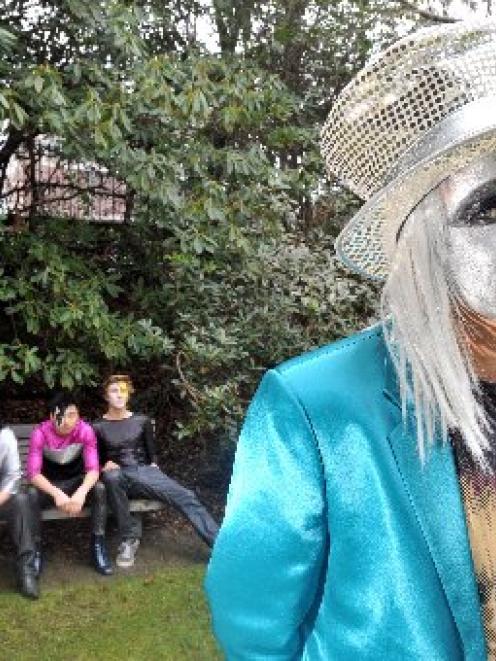 Ready to rock at Marama Hall yesterday are Ian Chapman and (from left) Marcel Rodeka, Dave Horizon, Ayumu Kobayashi and Max Gunn. Photo by Gregor Richardson.
Roll over, Beethoven. Bowie is in town.

The University of Otago's venerable home of classical music, Marama Hall, was turned into a rock concert venue yesterday. Contemporary music staff and students re-enacted pop singer David Bowie's 1972 album The Rise and Fall of Ziggy Stardust and the Spiders from Mars.

''It is a break with tradition for our department, but Bowie is as important to the world of popular music as Beethoven is to classical music,'' executant lecturer in contemporary music Dr Ian Chapman said yesterday.

''Marama Hall has always been a showcase for what the whole music department has to offer, and contemporary music is as much a part of that as classical music. They are the masterpieces of our time.''

The contemporary music course was established in 2000 and was now one of the most popular components of the music degree, Dr Chapman said.

The 90-minute lunchtime concert sold out, with music fans of all ages, including school groups, in attendance. ''The show is a presentation of my research and it's supposed to inform and inspire students that there is more to music than the aural. There is also the theatrical,'' Dr Chapman said.

''We wanted to do a concert to mark the 40th anniversary of David Bowie killing off his Ziggy Stardust persona as, at the time, it was one of the world's most famous artistic deaths.''