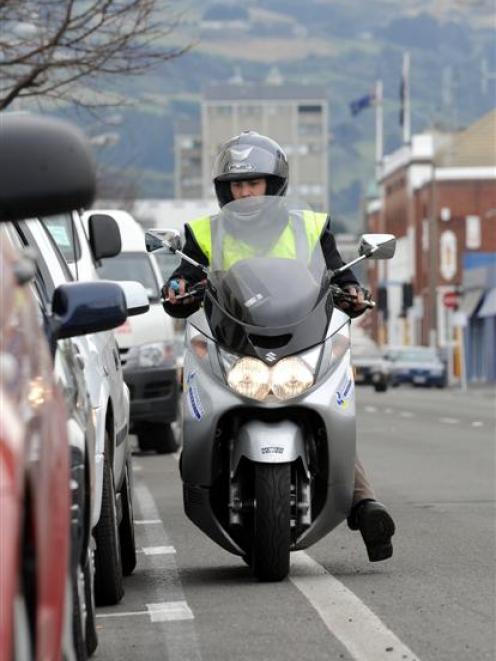 The strategy will be reviewed in its entirety, including the $4-an-hour parking fee in George St, and by early next week the four-hour maximum stay in George St should be cut to 30 minutes.

The limit in surrounding streets will be one hour.

A sometimes strained council meeting yesterday was subject to intermittent heckling from a group - mainly retailers - in the public gallery who opposed the strategy.

Some of those retailers after the meeting applauded the changes as a first step towards fixing a problem they say has cut into their trade.

Other decisions made were to select deputy mayor Syd Brown in place of Cr Michael Guest as chairman of the working party that will review the strategy.

Cr Guest will remain as a member of the working party.

Cr John Bezett, who is on leave, will be replaced by Cr Bill Acklin.

Cr Andrew Noone is the fourth member of the working party.

After the meeting, there was widespread off-the-record criticism of Cr Guest by councillors of his decision not to attend the meeting, with no apology noted on the agenda.

Cr Guest, on leave in Wanaka, responded last night he had made an apology, although not until 11am yesterday, three hours before the meeting.

Since July, the council's new parking strategy has been the target of increasing protest and criticism from city businesses, with complaints it has led to an alarming drop in trade in the central business district.

At a full council meeting yesterday, Cr Dave Cull put forward a series of recommendations he said would help reverse the damage, something the political grouping late last week signalled it would do.

He suggested cutting time limits and adding 10-minute parks outside pharmacies, ideas which received applause from the gallery.

During a series of speeches by councillors, Cr Brown was questioned about who, during public consultation, had argued for a four-hour maximum for George St.

He responded that had been the "flavour" of a focus group meeting the council had held.

Transportation planning manager Don Hill backed him up, and said it was a key outcome of those meetings.

It was also made clear at the meeting the council would revisit the government regulations on whether loading zones can be used by all vehicles, something delivery drivers have said was making their job difficult.

It was noted no other city in New Zealand read the law that way.

Bus stops were another concern, with Cr Richard Walls saying there were too many, and the size of the stops was too long.

Asked after the meeting why the council had failed with its strategy, both Crs Brown and Cull said they did not know, but expected a better understanding when the working party did its review.

Cr Brown said the cost would not be great, although some consultants would have to be used.

He hoped the time limit changes could be made as early as next Monday.

• Paid parking in George and Princes Sts between Rattray and Albany Sts be set at 30-minute maximum.

• The maximum in the rest of the core zone between Great King and Filleul Sts be one hour, except for areas near Dunedin Hospital.

• Working party to report back to the council as soon as possible on further changes to city parking, with agreed changes to be implemented by November.