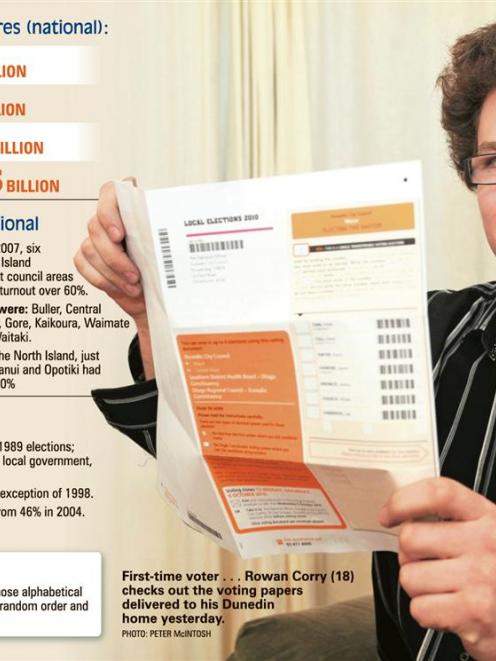 Local government figures. ODT graphic.
At the last local government election, in Dunedin and across most of New Zealand, voter figures dropped below 50% for the first time since the re-organisation of local government in 1989. Dunedin City Council reporter David Loughrey asks why the public is turning away from the action at the very heart of our system of government, what is behind the problem, and how it can be fixed.

From yesterday, postal voting forms began sliding into letterboxes across Otago and the rest of New Zealand, as the countdown to the 2010 local government elections began.

But with voting figures for Dunedin dropping to just 47.4% at the last election, whoever ends up sitting at the council table after October 9, the last day of voting, will likely have a mandate from a minority of registered voters.

The problem is not just in Dunedin.

Across New Zealand, in the 2007 local government election, only 44% of those enrolled to vote bothered to do so.

That was despite having the chance - some would say the responsibility - to have a say on organisations that not only regularly affect citizens' everyday lives, but have also grown to become multibillion-dollar operations.

Late last year, for the first time, the quarterly rates take for the country's councils topped $1 billion, and planned debt for councils in long-term plans has doubled from $5 billion to $10 billion. 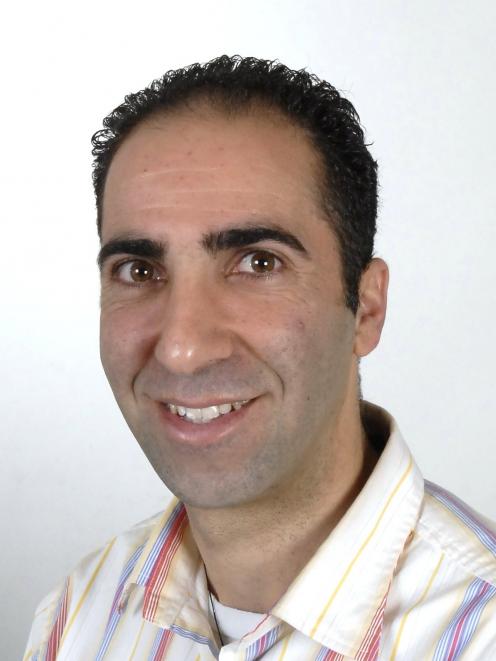 Dr Jacky Zvulun.
By October 9, voters will be asked to choose representatives for organisations that supply the water they drink, deal with the waste they produce, plan the cities and towns they live in, control the quality of the air they breathe, run their health services, and, at times, even provide moral and ethical leadership.

Yet across the country, voting papers sit on kitchen tables collecting coffee stains and getting covered by power, telephone and credit card bills before being discovered after the election date and turfed unceremoniously into the rubbish bin.

In Dunedin, voter participation in elections has dropped steadily in the last decade by nearly 20 percentage points.

But while the numbers are clear for all to see, not everybody agrees on the seriousness of the problem, the reasons, or the best solution.

Everything from postal voting to single transferable voting (STV), to voters concerned nothing they do will make a difference, have been blamed for the decline.

Dr Jacky Zvulun, who in his 2009 University of Otago PhD studied voter turnout and electoral participation in New Zealand, said he did not expect much to change in terms of the trend this year.

His overview of the literature on the subject when he started his studies showed there was limited research done about the issue.

What it did show was that low participation in local body elections was not just a New Zealand problem.

"Both internationally, nationally and locally numbers are down."

"You don't have interaction with [Prime Minister] John Key; you do with [Dunedin Mayor] Peter Chin."

He suggested a variety of influences behind the drop-off: busier 21st century lives, a lack of motivation through the print media, a voter base disconnected to the issues of the day, and even a public tiring of postal voting as a child tires of a new toy.

STV, he said, was not one of the main reasons for declining voter turnout, as different electorates used different systems, but all had the same problem.

Neither was postal voting behind the problem.

"In terms of postal voting; that helps. It increases voter turnout.

"If the Government decided to abandon postal voting you would see a decline."

One of the problems, he said, was that internationally, people had "lost empathy with politics".

"If you look at the last century, we had big [world] wars; people were motivated to go and vote."

"But by the 1990s, when the decline started, "people get to the stage they have everything".

"It doesn't matter. They're not really interested in politics, they're looking at their own space."

While that may be too difficult a problem for any one government to fix, Dr Zvulun said there was something the Government could do: keep postal voting, but bring back the ballot box for the last day of the election.

"What I'm saying is postal voting is a great system ... but you need the ballot box for the one day.

"If you don't have the chance to vote, you have that option."

Having an election day, he said, was exciting for many people; "people coming and going, all this action" could help people actually get out to vote if they hadn't used the postal voting option.

"People are looking for new things."

Many more people, for instance, were taking advantage of the ability to get involved in the consultation process.

That was despite complaints of "consultation fatigue".

"Putting that aside, I would like to see more people voting."

"You would have to decide if there is a problem or not."

In Australian states South Australia and West Australia, participation was in the low 30% area.

"They would be really excited with [New Zealand average figures of] 44%."

One interesting aspect, Mr Reid said, was the high voter turnout in smaller South Island towns, areas that used to average over 80%, and still made 60%, compared with Auckland, where it was closer to 35%.

People in larger cities became "disengaged" with their communities.

"That [national figure of] 44% says there is a problem in the big cities."

Mr Reid had his own views on why the figures were in decline.

LGNZ had been tracking the situation, and the organisation's surveys showed people were voting less because the Government had made voting too complicated.

In 2001, voting was introduced for district health boards, meaning people were faced with 50 or 60 candidates.

In Dunedin, for instance, voting papers include votes for both the city and regional councils, and the health board.

Surveys of people who did not vote, he said, showed they looked at the voting documents, put them aside to think about them, and did not pick them up again.

With some organisations using single transferable voting and others using first past the post, "to be honest, it's just a more complex activity than it was".

"It's taking more time, and it's too much of a hassle."

An inquiry was launched after the 2004 local body elections that recommended requiring the Electoral Commission to provide more education and promotion of the elections; that the voting time be reduced from three weeks to two and that the last day of polling be developed into a ballot-box voting day with close of votes extended from noon to 5pm.

An inquiry after the 2007 election recommended something be done about those recommendations.

The Otago Daily Times asked Minister for Local Government, Rodney Hide, if he had a message for voters as to why they should take the effort to vote.