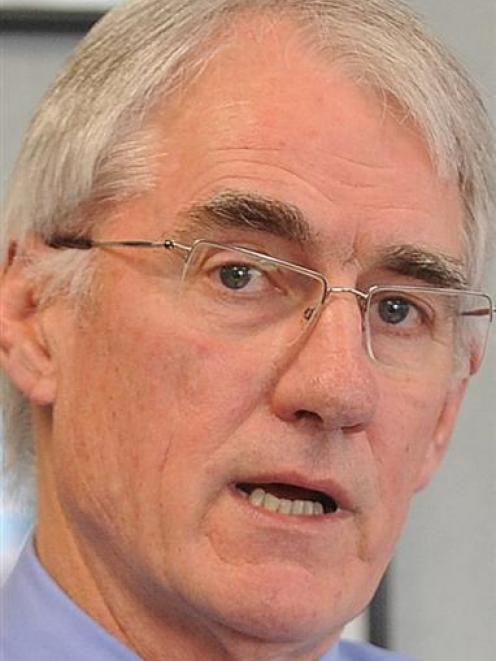 Athol Stephens.
The way dividends are distributed from the Dunedin City Council's Waipori Fund is to be reviewed to address repeated reductions of the capital value of the fund.

For the past two years, councillors setting the council's annual budget have taken a distribution of about $4 million from the fund on the basis of an estimated surplus that has not actually occurred.

That meant money had to come off the principal of the fund, against council policy to protect the fund.

The fund was established in 1999 using proceeds from the sale of the Waipori electricity generation scheme. Its principal, which was $56.7 million when the fund was set up, stands at about $70 million.

Council general manager finance and resources Athol Stephens told councillors at last week's annual plan deliberations staff sought agreement to use estimated cashflow as a more reliable basis for the distribution than the current policy of estimating the fund's market value and distributing the difference to council.

Market value was less predictable than cashflow, he said.

Estimates were made well in advance of knowing the actual performance of the fund, and that was a flaw exposed over the past two years as the value of the fund fell below estimations.

Changing the policy should reduce the levels of uncertainty about the size of the distribution, he said.

A March report from Dunedin City Treasury Ltd to council recommended the same and suggested amending strict language in the fund's original statement of objectives and policies about the requirement to protect the fund under all circumstances. At the time councillors voted to let that report lie on the table while they considered other uses of the fund.

Crs Lee Vandervis and Jinty MacTavish said on Friday they thought it would make more sense for council to wait a year and see how much the fund made before committing any money to the budget.

Mr Stephens said that would mean a shortfall for an annual council budget of about $3 million, which would have to be funded by debt or removed from the budget.

Dunedin Mayor Dave Cull said it was clear waiting a year was the best way to progress, but the council could not afford to do it in 2012-13.

He preferred to leave things as they were.

The council had budgeted for a dividend of $1 million less than initially estimated for 2012-13, so it was more likely to be complying with the policy of not reducing the capital value of the fund anyway, he said.

He moved instead that councillors send a letter of comfort to Dunedin City Treasury (DCTL) and request, by September, a review of the policies governing the fund.

Cr Vandervis said he was "completely uncomfortable" with the ongoing "delayed pragmatism", even though he recognised there was some sort of need for it.

The motion did not mean council was ignoring the matter, even though this had been an issue for three years, but the best way forward was to take the money this year and sort it out before next year, Cr Kate Wilson said.

Cr MacTavish said she would support the move with a "slightly heavy heart" because it was eating into the council's reserves.

"But the reality is we have inherited a fiscal situation that is untenable, and we can't deal with it any other way."

The letter of comfort and request for a review was the right way out of the situation, deputy mayor Chris Staynes said.

It was not reasonable to expect City Treasury to make the disbursement in breach of the policy, but that could not be changed before the annual plan was finalised, he said.

"This gives us some breathing space and it gives DCTL some comfort that the council tales responsibility for any breach, and not them."

Mr Cull said everyone around the table agreed breaching the policy was unacceptable and he hoped the situation would not rise again.

The motion was carried by a majority.

Councillors also resolved, as part of the motion, that a debt management strategy be prepared by staff together with DCTL and Dunedin City Holdings Ltd, for council to consider before the preparation of the next annual plan.