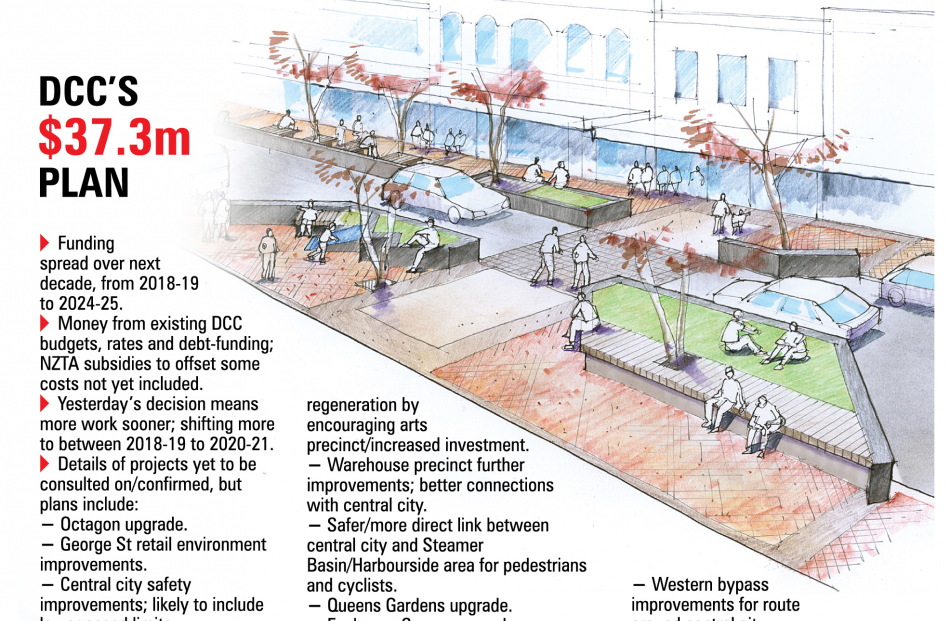 The proposal is for a revamped Octagon, more pedestrian and retail-friendly George St, paving replacements and other amenity improvements rolled out across the central city by 2025.

It would also include further improvements to Princes St and the warehouse precinct, Queens Gardens, an eastern freight bypass, and possibly even a bridge to the harbourside zone.

Councillors at yesterday's long-term plan deliberations endorsed the plan and agreed to accelerate it.

That meant the council would bring forward more of the work on the $37.1 million plan, to the period between 2018-19 and 2020-21, rather than spreading it evenly over the next decade.

The cost would be covered by the council and New Zealand Transport Agency subsidies expected to be worth about $8.1 million, council urban design team leader Dr Glen Hazelton said.

Accelerating the work meant the council would have to borrow some of its share, while covering the rest through rates revenue and existing budgets, he said.

The details of individual projects and their costs were yet to be released, but the price of an Octagon upgrade has previously been suggested as $6 million.

Dr Hazelton told yesterday's meeting the projects would each require extensive community consultation, and in some cases public trials, before being implemented.

That would include any move to introduce shared spaces or pedestrianisation, which could take many forms but would require examples drawn from around New Zealand and overseas, he indicated.

The detailed planning and consultation work would be carried out over the next three years, before a construction phase began from 2018.

Councillors were quick to praise the plan, including Cr Aaron Hawkins, who said the collaborative approach used in the warehouse precinct showed what could be achieved.''

We have seen it work, and now it's time to pick up that approach and roll it out across the CBD.''

This presents a huge opportunity for businesses in Dunedin if we do it right and if we do it together.''

The work was not just about creating attractive spaces for people, but also encouraging the economic development of the city, he said.

Deputy mayor Chris Staynes said it was clear retail would ''flourish'' wherever people gathered, but George St was looking ''very dated and far from being the place you go because it's a nice place to be''.''

I'm sure that's having an impact in that precinct.''

The Otago Chamber of Commerce - of which Cr Staynes was a director and retail committee member - was also concerned about diminishing activity in the city's retail sector, he said.

The concerns made progress on the central city plan ''very timely'', he said.

Cr Richard Thomson - also a retailer - said the council's focus should also be on streets surrounding George St. Some retailers were already shifting there as a result of market forces.

Councillors also backed Cr Jinty MacTavish's move to include further planning work for improvements in the tertiary precinct in the LTP.

That could lead to amenity improvements designed to lift the look - and also the behaviour of students - in the area.

Council staff said plans were still being discussed by the group of stakeholders, including the council and University of Otago.

Councillors asked staff to consider funding and timing issues in time to report back on the details at the next LTP in 2018.

That pleased Cr Staynes, who said the tertiary precinct remained one of the greatest drivers of economic activity in the city, and the council needed to maintain its focus on improving the area.

''Why should we not aspire to see Otago University recognised as the Cambridge of the southern hemisphere?''