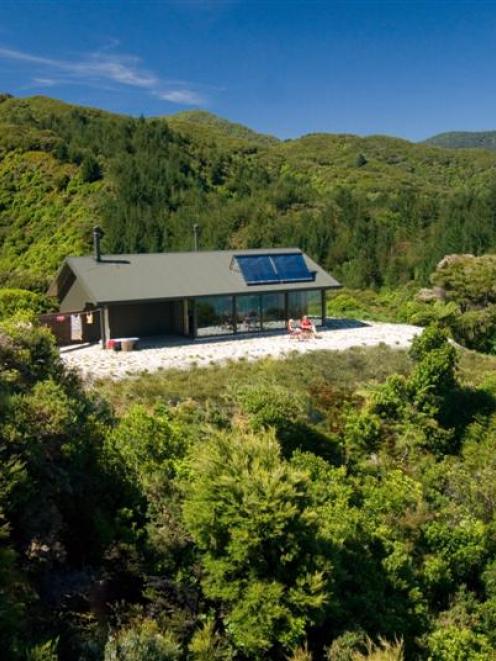 It is not connected to the national electricity grid but runs off solar energy, a battery bank and a wood burner.

If it had been connected to electricity, its heating costs would have been an estimated $41 a year, Mr McIntyre said.

Nine teams entered the competition, which is funded by the Ministry for the Environment.

Entrants designed and built examples of living accommodation including a rammed-earth construction, a house clad with a new product made of timber and soy, a straw-bale house, and a "clip-on" outdoor balcony room for an existing high-rise building.

The teams presented their projects at the seminar yesterday, with competition results announced at a dinner in Port Chalmers.

Mr McIntyre (46) worked on sustainable and low-energy houses while living in his wife Antje's native Germany in 2002 and 2003.

When the couple and their two sons returned to New Zealand in 2004 they bought a property at Golden Bay, finishing a rambling "hippie house" already on the property and building the cottage as homestay accommodation.

He said the cottage, completed in December, was built to "challenge the norm" and show such a house could be built in this country.

"A lot of people talk about building a house like this but are not quite brave enough to do it and end up compromising low-energy ideals for cost."

However, Mr McIntyre is realistic.

The construction costs of $2500 per square metre were high - the cost of a standard design new home in Dunedin ranges from $1100 to $1400 per square metre - and he said New Zealanders had yet to be convinced spending more money up-front was cost-effective in the long run.

". . . there is something special about it being 3degC outside in the middle of winter and 24degC inside and not having any heating on."

In April, the "Little Greenie" became the first house in the country to score nine of out 10 on the Energy Efficiency and Conservation Authority's home energy rating system.

Mr McIntyre said the next step was documenting temperatures and energy use data and collating it into a report.

That project would be overseen next year by an energy studies student from Victoria University.