Courthouse to be saved - Clark 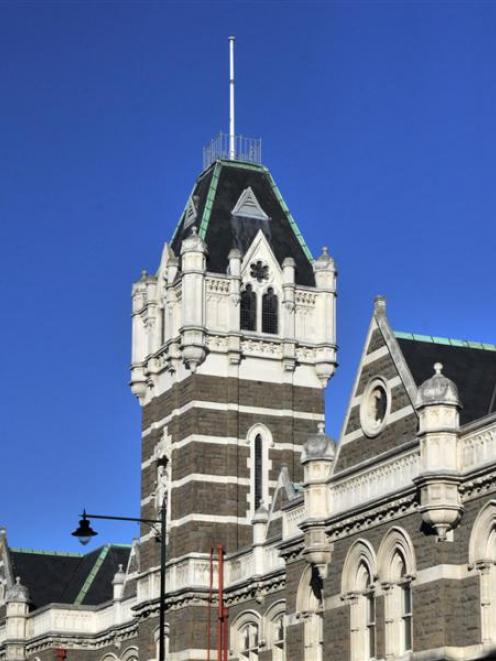 The Dunedin courthouse. Photo by ODT.
Dunedin's historic courthouse will be saved, strengthened and have court services returned to it, the Otago Daily Times has been told.

Dunedin North MP David Clark said he believed the announcement was planned for the coming week, and would be delivered by Justice Minister Amy Adams.

The ODT asked Mrs Adams to confirm the report yesterday, but she was not able to respond before publication.

The minister's office referred questions to the Ministry of Justice, whose spokesman said nothing about the potential announcement, instead discussing the ''contentious'', ''complex'' and ''costly'' process.

''Options for the long-term future of court services in Dunedin are being assessed,'' the spokesman said.

Mr Clark said he understood ''from some very good sources'' the announcement would be made during the minister's planned trip to Dunedin next week.

''Given the level of public sentiment about the courthouse, she would be brave to come to Dunedin to announce anything else,'' Mr Clark said yesterday.

He said there had been a ''lack of transparency throughout the process''.

Dunedin's legal community and the ODT had repeatedly asked the ministry for answers about the courthouse's future, but had been ''stalled from receiving official information'', Mr Clark said.

The ODT was last week told by the ministry a deadline for answers - due on June 2 - would be extended 10 days.

Mr Clark called that timing ''a remarkable coincidence'' that fitted ''exactly'' with the expected announcement.

''It is hard to escape the conclusion that the announcement is being stage-managed. It looks to me that there is a clear connection between the ministry's delaying tactics and the upcoming ministerial announcement.''

If such tactics were proven true, that would amount to ''an utter breach of the Official Information Act's intended purpose'', he said.

The public's right to information on such significant taxpayer-funded services should supersede a minister's desire for political gain, he said.

He said the Government would be ''arrogant and out of touch'' if it was attempting to control Official Information Act responses to coincide with ministerial announcements.

''We can't have a functional democracy without freedom of the press. When the information is bad, they [the Government] don't want the public to know. Everything is being stage-managed.''

The courthouse was deemed an earthquake risk in 2011 and many of its functions were shifted to other buildings in the city.

In 2013, the Ministry of Justice announced it was commissioning design work which would culminate in the building being retained as Dunedin's seat of justice.

However, no further announcements on that work were made, and in May this year the last court services remaining in the building were shifted.

The building has been empty since May 18.

The ministry has spent more than $6 million on moving services to other buildings around Dunedin, principally an office building in High St.

Dunedin barrister Anne Stevens, a vocal advocate for the retention of the historic courthouse, said the news, if true, would be celebrated throughout every sector of Dunedin society.

She said she could ''hardly sit still'' when she learned the announcement was likely.

''Everybody wants that building up and running.''