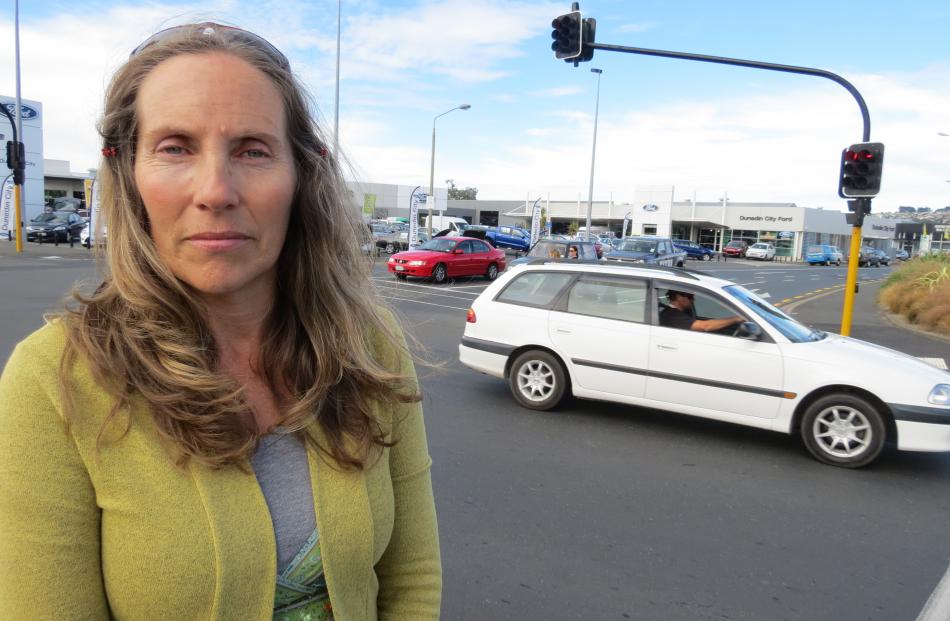 Close call . . . Forbury resident Kirsten Anderson is worried about the standard of driving in South Dunedin after she says she was nearly forced out of her lane into a head-on crash at this Andersons Bay Rd intersection. PHOTO: JONATHAN CHILTON-TOWLE.

A South Dunedin woman hopes her near-miss with a dangerous driver might shine a light on the issue of poor driving in the area.

The incident occurred about two weeks ago. About 7.30am one morning, Forbury resident Kirsten Anderson was driving along Andersons Bay Rd. She stopped at the lights at the intersection with Macandrew Rd and, when she got a green arrow, turned right into Macandrew Rd.

However, a driver waiting in the opposite lane of Anderson's Bay Rd chose that moment to run a red light and turn left into Macandrew Rd at the same time as Ms Anderson.

Ms Anderson says she was forced to swerve on to the other side of the road and remained there for about 100m as the other driver raced past her in the left lane. A male driver approaching in the other lane had to swerve to avoid Ms Anderson, who believes she would have been involved in a head-on collision if it had not been for his quick action.

''What in God's name were they thinking?'' she said.

Once back in the correct lane, Ms Anderson followed the dangerous driver and blared her horn.

The other driver, a woman possibly in her 30s, apparently responded by making an obscene gesture and speeding away.

Ms Anderson had managed to take down the offending car's number plate and considered reporting it to police but decided against it, as she felt the incident was symptomatic of a wider problem in the area.

She believed incidents of bad driving were very common in South Dunedin, having regularly witnessed ''cowboy'' drivers speeding, not keeping left, not indicating, and even pushing through the barriers at school crossings.

Speed had been a factor in the death of her pet dog, Sophie, which was hit and killed by a driver in front of Ms Anderson's home in 2013. The driver did not stop.

South Dunedin's flat terrain could be a factor, as drivers in Dunedin's hilly suburbs

She believed some drivers saw the flat, straight streets in South Dunedin as ''a green light to do whatever they wanted to do.''

Ms Anderson believed increased police patrols and taking another look at some signs and traffic lights might help with the issue.

Otago Coastal Road Policing manager Senior Sergeant Phil McDouall said the number of crashes in the South Dunedin area was no higher than in other parts of the city.

The main hazard in the area was intersections, he said.

He advised residents witnessing an incident involving dangerous driving to call *555 or 111, or take the registration and vehicle make and model details and report the incident at a police station.